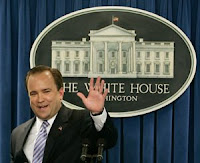 Former press secretary Scott McClellan produced “What Happened: Inside the Bush White House and Washington's Culture of Deception," a memoir bashing his old boss from a deceptive selling the Iraq war, secrecy at all levels. And when it comes to mistakes, what mistakes?

According to AP, Scott McClellan calls:

the operation "insular, secretive and combative"

“pushed to leave earlier than he had planned…kept out of the loop on key decision-making sessions.”

"I fell far short of living up to the kind of public servant I wanted to be.”

The news media were "complicit enablers" for focusing more on "covering the march to war instead of the necessity of war."

Bush's decision to go to war in Iraq, a determination McClellan says the president had made by early 2002 - at least a full year before the invasion - if not even earlier.

During the "political propaganda campaign to sell the war to the American people," Something else was downplayed as well, McClellan says: any discussion of "the possible unpleasant consequences of war - casualties, economic effects, geopolitical risks, diplomatic repercussions."

In Bush's second term, as news from Iraq grew worse, McClellan says the president was "insulated from the reality of events on the ground and consequently began falling into the trap of believing his own spin."

"The Iraq war was not necessary," McClellan concludes.

“someone with a penchant for self-deception if it ‘suits his needs at the
moment,"


“a man with a lack of self-confidence that makes him unable to acknowledge when he's been wrong.”

“lacked real accountability in large part because Bush himself did not embrace openness or government in the sunshine.”

McClellan calls Vice President Dick Cheney "the magic man" who "always seemed to get his way" and sometimes "simply could not contain his deep-seated certitude, even arrogance, to the detriment of the president."

Secretary of State Condoleezza Rice, who was national security adviser earlier in Bush's presidency, "was more interested in figuring out where the president stood and just carrying out his wishes while expending only cursory effort on helping him understand all the considerations and potential consequences" of war. Rice "was somehow able to keep her hands clean, even when the problems related to matters under her direct purview," McClellan says, but he predicts that "history will likely judge her harshly."

Karl Rove "always struck me as the kind of person who would be willing, in the heat of battle, to push the envelope to the limit of what is permissible ethically or legally."

When Hurricane Katrina hit the Gulf Coast in August 2005…the administration went on autopilot "rather than seizing the initiative and getting in front of what was happening on the ground."

The White House responded angrily "Scott, we now know, is disgruntled about
his experience at the White House," said White House press secretary Dana
Perino. "We are puzzled. It is sad. This is not the Scott we knew."

McClellan says Bush loyalists will no doubt continue to think the administration's decisions have been correct and its unpopularity undeserved. "I've become genuinely convinced otherwise," he says.