Free speech and the First Amendment has been weaponized by the Trump Party. Not only is it being used to spread bigotted racist hate speech, but it's also been transformed from the traditional verbal/written speech into money.

There are even different rules for Democrats, who should not be allowed to spend money on campaigns because they're doing it for all the wrong reasons...it's right there in the originalist reading of the First Amendment I think. 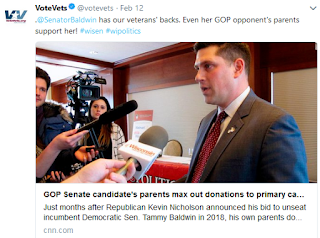 Democratic voter spending "Represents Intolerance:" Senate candidate Kevin Nicholson blasted his own parent's free speech right, describing their support and donations to Sen. Tammy Baldwin as a “representation of the intolerance” in the Democratic Party...all because they gave the max amount? Don't tell Koch's or Adelson:


The Hill: Wisconsin GOP Senate candidate Kevin Nicholson slammed his own parents for making the “maximum contribution” of $2,700 to his Democratic opponent in a fiery editorial published by Fox News on Monday ... accused his parents ...
“My parents have since turned their back on me, my wife, their grandchildren, and their extended family,” Nicholson wrote in the editorial. He pointed to his parents' donation as a “representation of the intolerance” in the Democratic Party.


“Adding to this, they decided to make the maximum contribution to my Democrat opponent in my campaign for U.S. Senate in Wisconsin, an intentional personal blow that made headlines across the country. It was deliberate – and it is a true representation of the intolerance of a political philosophy that stands on the false platform of tolerance.”