Angry Wisconsin voters resent being forgotten, and worse, living paycheck to paycheck in what they've been told is a "roaring" economy. That's what voters liked about Trump's campaign rhetoric, as bizarre as it was. He said he'd help those who always say they don't want help...that's so Republican.

Alternet describes Alissa Quart's view of this from her new book “Squeezed: Why Our Families Can’t Afford America.”

Today, with their incomes flat or falling, these Americans scramble to maintain a semblance of what their parents enjoyed. Trained to be educators, lawyers, librarians, and accountants, they do work they can’t stand to support families they rarely see. Petrified of being pushed aside by robots, they rankle to see financial titans and tech gurus flaunting their obscene wealth at every turn. Headlines gush of a humming economy, but it doesn’t feel like a party to them ... Their new reality: You will not do as well as your parents. Life is a struggle to keep up. Even if you achieve something, you will live in fear of losing it. America is not your land: it belongs to the ultra-rich.

And there's good reason to worry: 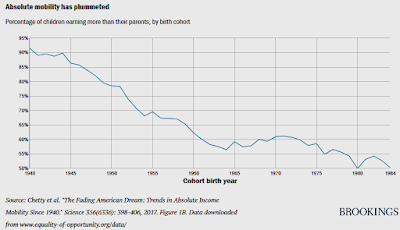 Scott Walker's War Against the Minimum Wage: While Walker hands out billions of dollars to big business, employee wages are still oddly controlled by "free market" forces. Wisconsin's wages were climbing back up when Walker came in, enacted Act 10 and steered clear of raising the minimum wage: 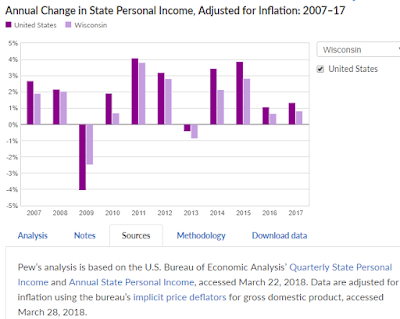 Walker said $7.25 just fine, thinking he was making a strong case in front of a panel of reporters. More than anything, they were amazed at Walker's surreal interpretation of the statement, "people want the minimum wage increased" You'll laugh, you'll cry...Oh, and I cut out Walker's word salad non-answers:


Scott Walker: "The left claims that they're for American workers and they've just got really lame ideas — things like the minimum wage. Instead of focusing on that, we need to talk about how we get people ... the careers that pay far more than the minimum wage."

So Walker did just that, talked, and never got anyone "far more than the minimum wage."

Walker's fanciful "Manufacturing Renaissance" failed until Foxconn. Now Walker's discovered Tech?: Well, better late than never. But no one would be so irresponsible to put all their future state budgets into the Foxconn basket?

In the supposed anti-business Liberal hellhole Madison, they discovered that tech talent "secret" long ago, now see what happened:


“Tech companies continue to see Madison as a place to tap into quality talent and real estate at costs much lower than in the major national markets,” said Chase Brieman, of CBRE’s Madison office.


1. The Madison area is ranked 3rd, tied with Orange County, California, on a list of 50 metropolitan areas in North America by the Scoring Tech Talent Report issued by CBRE, a major commercial real estate services and investment firm based in Los Angeles.

3. Ottawa, Ontario, and Los Angeles were listed as the top two in rising tech talent.

5. The Madison area ranks highest in its concentration of millennials — 26.4 percent — as a portion of the urban population.

6. Madison is No. 2 in educational attainment with 59.6 percent of urban residents age 25 or older holding a bachelor’s degree or higher. Seattle was No. 1.


Under pressure to raise the state's minimum wage, Wisconsin Gov. Scott Walker confidently declared that there was no need. Low-wage workers had filed a complaint charging that the state's minimum wage -- $7.25 -- did not constitute a "living wage" as mandated by state law. But the Republican governor's administration, after examining the issue, announced on Oct. 6 that it found "no reasonable cause" for the workers' complaint.

The only economic analysis that the administration released in response was one from the Wisconsin Restaurant Association -- a group that lobbies against minimum wage increases. The restaurant association's study argued that a minimum wage increase would harm the state. It did not actually address whether workers can survive on the $7.25 minimum wage. "It's outrageous that Walker's administration only thought to consult the restaurant industry, and not the workers themselves," said Dan Cantor, the national director of Working Families.

The Alissa Quart book "Squeezed" also included the following, as food for thought:


Some are waking up to the fact it is the wealthy and their purchased politicians who have systematically and deliberately stripped them of power. Deprivations like paltry employee rights, inadequate childcare, ridiculously expensive health care, and non-existent retirement security didn’t just happen. Abstract words like deregulation and globalization become concrete: somebody actually did this to you by promoting policies that leave you high and dry. As Quart indicates, understanding this is the first step to a change of consciousness, and her book is part of this shift.

Michelle Goldberg recently announced in the New York Times that “The Millenial Socialists are Coming,” indicating the intense dislike of traditional politics in urban centers. These young people do not think of things like debt-free college or paid family leave as radical: they see it done elsewhere in the world and don’t accept that it can’t be done in America.