It's important to put the following story in context:

Yes, Walker was a favorite alright:

Democrats seized on Trump calling Walker "a favorite of mine" and noted that Trump had trashed Walker in the past, including when they were both seeking the GOP nomination for president.

But it was the point of the meeting that twisted reality into a pretzel:


Thursday's ceremony was focused on adding jobs and training workers

Jobs without education, a neat Trick: Really, after creating a schooling funding crisis in the U.S., Republicans like Walker and Trump are now worried about the labor shortage they set up for the future? Note: Companies are now returning to the days when they trained their own employees. Who would have thought:

DGA: Governors Mary Fallin (R-OK), Doug Ducey (R-AZ), and Matt Bevin (R-KY) have all slashed funding for education and are largely to blame for the poor conditions

Washington Post: Between 2008 and 2015, the total state per-student funding for grade schools dropped in 29 states, less total school funding per student than they were in 2008, with the sharpest drops coming in Republican-led places such as Arizona, Florida, Alabama and Idaho, according to a study last year by the left-leaning think tank Center on Budget and Policy Priorities.

Public investment in K-12 schools — crucial for communities to thrive and the U.S. economy to offer broad opportunity — has declined dramatically in a number of states over the last decade. Worse, some of the deepest-cutting states have also cut income tax rates, weakening their main revenue source for supporting schools. These cuts risk undermining schools’ capacity to develop the intelligence and creativity of the next generation of workers and entrepreneurs.

Here are more charts highlighting the GOP record on education: 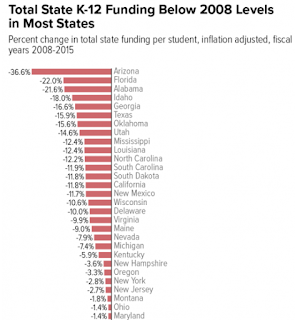 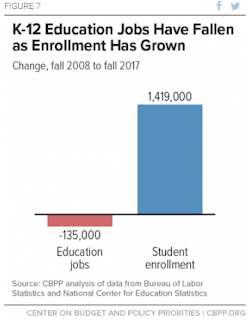