When it comes to the dying coal and nuclear energy industries, let's remember the words of Ron Johnson actually promoting "creative destruction" of jobs in Wisconsin:


Johnson: "In a free market capitalistic system there's always winners and losers, it's creative destruction. That's what happens. It's unfortunate, but let's face it, if it weren't for that we'd still have buggy whip companies."

Think about it, that attitude won Johnson two Senate terms, from an "America First" voting base who cares more about the (R) next to a name than Johnson's "who cares" attitude about manufacturing job losses in Wisconsin. Imagine trying to convince Trump Party voters that coal and nuclear energy is also falling victim to "creative destruction." Ain't gonna happen, despite the massive shift in jobs to renewables. It was never about job creation or "uncertainty," but instead a ploy to attack Dems:

Capitalism/Free Marketplace Energy Industry goes Renewable: With wind and solar energy prices at/lower than the price of coal and gas, "free market" energy companies woke up to the fact that they would only have equipment maintenance costs to contend with. No orders of coal or gas, just a free supply of sun and wind:

1. Xcel Energy is investing heavily in affordable wind energy to power their customers’ needs. In fact, it plans to be 85% carbon free and 60% renewable by 2030. Xcel Energy plans to own more than 10,000 MW of wind energy by the end of 2021. Xcel Energy CEO Ben Fowke said, "[Wind] beats gas, even at today’s prices. I like to say we backed up the truck because the fuel of tomorrow was on sale today.”

3. MidAmerican Energy is the largest electric utility in Iowa and also serves customers in Illinois, South Dakota, and Nebraska. It plans to provide net 100% renewable energy for its customers energy needs by 2020, and it recently surpassed the 50% mark. CEO Bill Fehrman said, "The beauty of wind is there’s no fuel costs. We will be able to virtually serve 89 percent of our customers’ needs with an energy resource that requires no fuel.”

4. Consumers Energy is Michigan’s largest energy provider and has a goal to reduce carbon emissions by 80 percent by 2040. Consumers Energy CEO Patti Poppe states that “our price to install and deliver wind power is down 75 percent from where we originally thought it would be. In the past people believed that we had to choose between affordable and clean energy; we don’t subscribe to that sucker’s choice.”

DTE Energy is the largest investor of wind and solar energy in Michigan. It plans to power 25% of their energy needs with renewables by 2030 and reduce carbon emissions by 80% by 2050. DTE Energy has invested over $2 billion in wind energy in the past 10 years, noting that “[wind energy has] created hundreds of jobs for residents and a local tax revenue for communities while delivering reliable, affordable and clean energy for our 2.2 million Michigan customers.”

Electric Heat...Again? Yes. So much for that new high efficincy gas furnace:

Chicago will need to embrace smart thermostats and electric heating to meet long-range carbon reduction goals, according to a recent report. The study by the Rocky Mountain Institute ... includes making the switch from natural gas to electric heat.

Is Trump's Trade War "Created" Destruction? I'm fascinated by Trump Party voters, who once screamed bloody murder over the "uncertainty" created by Obama regulations, and are now willing to give Trump the wait-and-see benefit of the doubt over the massive uncertainty of an expanding trade war with no plan or exit strategy.

Even more surreal, Republicans get to enjoy being against the tariffs all the while being for the anger created by the politics of resentment; other countries have been taking advantage of us, wah! So if a company like Harley-Davidson moves manufacturing and jobs overseas because of Trump's trade war, that's okay: 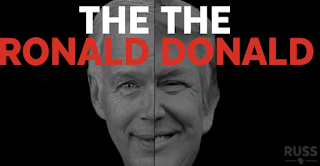 Sen. Ron Johnson (R-Wis.) warned on Sunday that President Trump’s policies on trade are starting to do “permanent damage.” Johnson said that his state of Wisconsin has “been particularly targeted” by China’s recently imposed tariffs, which came in response to Trump’s trade measure against the country.

Johnson said that motorcycle manufacturer Harley-Davidson was right to move parts of its production overseas. "Because of the beginning of the trade war...our state has been particularly targeted. Harley-Davidson has been targeted, our cranberry industry, our ginseng industry, but people don't realize that Wisconsin is a huge manufacturing state. They were paying 6 percent tariffs [to get] into Europe, now it's 31 percent. If they manufacture in another country they can enjoy the lower steel prices and remain competitive. So they really don't have a choice."