Homeland Security's Ron Johnson in Russia on 4th of July? Can Trump Party do anything now?

...and just yesterday, despite the Senates own findings, Wisconsin's own Sen. Dumb Ron Johnson made a courtesy call to Russia anyway as a reward for...meddling? 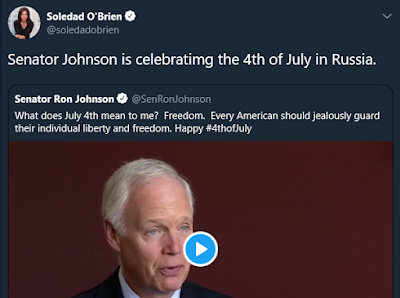 ArabNews: “I am here not to accuse Russia of anything, I am here to try to find ways to improve relations,” Sen. Shelby told Russian lawmakers, according to a transcript published on the Duma website. Kremlin spokesman Dmitry Peskov said the Kremlin was “very satisfied” that the senators were visiting Russia.

Nothing seemed more tone deaf and outright bizarre than a Russian trip by Johnson and the gang of 8 other senators... 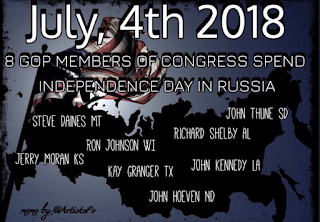 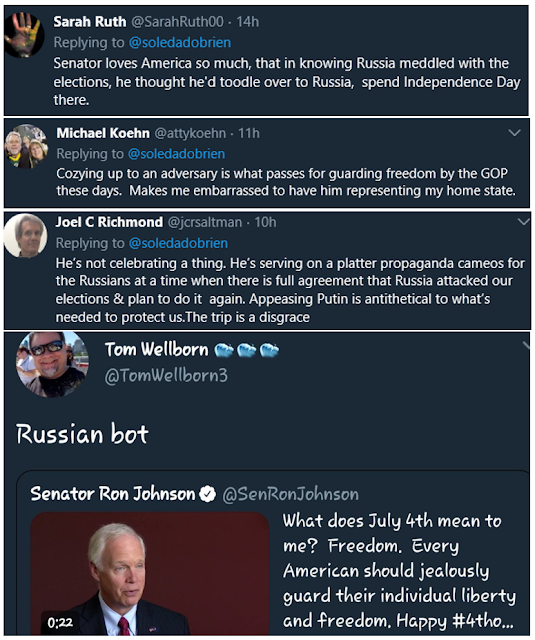 Washington Post's Dana Milbank pretty much summed it up for me:


For the Wisconsin Republican, it meant, specifically, the freedom to spend July 4 in Moscow with seven other Republican lawmakers posing for propaganda photos with Russian officials. On the same day it was reported in Britain that two more people had been poisoned by a Russian nerve agent ... the day after the Senate Intelligence Committee affirmed the U.S. intelligence community’s conclusion that Russia interfered in the election to help Donald Trump. Johnson and his colleagues ... also exercised their freedom to soft-pedal their criticism of the Russian government, leading Russian politicians and state media to mock them as supplicants.

“I’m not here today to accuse Russia of this or that or so forth,” Shelby told Duma Speaker Vyacheslav Volodin. “I’m saying that we should all strive for a better relationship.”

Yes, let us strive for camaraderie with a government that attacks us with cyberwarfare, meddles in our elections, denies entry to American officials who are critical of Moscow, destabilizes Europe and the Middle East, kills critics at home and abroad, occupies its neighbors’ land and shoots down the occasional passenger jet. Or, as Shelby put it, “this, that or so forth.”

One can hardly wait to see the lawmakers’ next codel: meeting with wounded Taliban fighters on Veterans Day? A Memorial Day wreath-laying for fallen members of Saddam Hussein’s Republican Guard? Flag Day at a street protest in Tehran?