Medicare for All would cost $32 Trillion over 10 years...LESS than what we're paying now. Pt 1

The price tag for universal health insurance in the U.S. is in, and it comes out to $32 trillion over 10 years. $3.2 trillion a year. Wow, that's crazy, isn't it? It may sound like a lot but that's what we're paying now, even with high deductibles and tens of millions of uninsured. Americans are tired of the uncertainty: 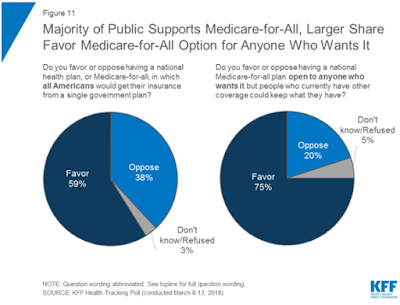 The plan could save the United States more than $2 trillion over 10 years in national healthcare spending,

So a national health plan sounds like a better deal because everyone gets covered and everyone as a gigantic group pays a whole lot less.   When you consider a universal single-payer program would 1) cover every single American, eliminating uninsurance and 2) provide much more robust benefits, covering more services than getting covered right now, then it starts to look like a good deal. More people covered. More services covered. Same price, more or less. Medicare for All (M4A) would expand the range of services covered by federal insurance (for example, dental, vision, and hearing benefits).

Mercatus is projecting a $32 trillion increase in federal spending ... In terms of overall health care spending in the United States over the same period, however, they are actually projecting a slight reduction ... the country is going to spend about the same. "Lower spending is driven by lower provider payment rates, drug savings, and administrative cost savings."

A brand-new estimate from the libertarian-leaning Mercatus Center at George Mason University ... (and) the left-leaning Urban Institute came up with the exact same number in 2016.

Conservatives hopped all over the figure. But there are a lot of ways to think about $32 trillion — and one might be that it's actually kind of a bargain. Many Americans still hold real reservations about making Big Government any bigger ... but a closer look at these new estimates reveals "$32 trillion" isn't quite as much as you might think.

The Mercatus Center scholars assume (as the Sanders bill dictates) that hospitals and doctors would be paid at Medicare rates, a cut from private insurance rates but an increase from Medicaid rates ... Still, this seems like a reasonable estimate from a group that we would expect to be pretty skeptical of single payer — and it still looks like kind of a good deal.

Single-payer supporters are going to have to come up with a persuasive case that, yes, the federal government is going to spend more, but overall spending won't go up. Taxes are going to rise for somebody, but many or even most Americans could end up saving money on their premiums or on out-of-pocket costs.

It could be a winnable case, given evolving attitudes about a person's right to health care. But polling shows many people's opinions on this are still malleable. Persuasion is necessary.

Paul Ryan's Shop-for-Healthcare doesn't Work: Why do we need Medicare for all? Because supposed "patient-centered" free market insurance doesn't work. Here's why:

Shopping for Health Care Simply Doesn’t Work. So What Might? It’s often too complicated. And even when it isn’t, almost no one does it.

A body of research — including randomized studies — shows that people do in fact cut back on care when they have to spend more for it. The problem is that they don’t cut only wasteful care. They also forgo the necessary kind. This, too, is well documented, including with randomized studies.

People don’t know what care they need, which is why they consult doctors. There’s nothing inherently wrong with relying on doctors for medical advice. But it runs counter to the growing trend to encourage people to make their own judgments.

Some care is elective, and so potentially “shoppable.” Scholars have estimated that as much as 30 or 40 percent of care falls into this category. It includes things like elective joint replacements and routine checkups. And yet very few people shop for this type of care, even when they’re on the hook for the bill. Maybe it’s just too complex. Even when price transparency tools are offered to consumers to make it easier, almost nobody uses those them.

A National Bureau of Economic Research working paper published Monday adds a lot more to the story. Even if 40 percent of health care is shoppable, people are not shopping. What seems likelier to work is doing more to influence what doctors advise.

For example, we could provide physicians with price, quality and distance information for the services they recommend. Leaving decisions to patients, and making them spend more of their own money, doesn’t work.

Labels: Medicare for all
Email ThisBlogThis!Share to TwitterShare to FacebookShare to Pinterest