Just when you thought the Trump administration couldn't plunge to lower moral depths...

A resolution to encourage breast-feeding was expected to be approved quickly and easily in Geneva for the United Nations-affiliated World Health Assembly. Based on decades of research, the resolution says that mother’s milk is healthiest for children and countries should strive to limit the inaccurate or misleading marketing of breast milk substitutes.

Then the United States delegation, embracing the interests of infant formula manufacturers, upended the deliberations:


1. Sought removing language that called on governments to “protect, promote and support breast-feeding.”

2. Sought removal of another passage that called on policymakers to restrict the promotion of food products that many experts say can have deleterious effects on young children.

3. When that failed, they turned to threats, according to diplomats and government officials … The Americans were blunt: If Ecuador refused to drop the resolution, Washington would unleash punishing trade measures and withdraw crucial military aid. The Ecuadorean government quickly acquiesced.

The issue was recounted by more than a dozen participants from several countries … “We were astonished, appalled and also saddened,” said Patti Rundall, the policy director of the British advocacy group Baby Milk Action. “What happened was tantamount to blackmail, with the U.S. holding the world hostage and trying to overturn nearly 40 years of consensus on best way to protect infant and young child health.”

It wasn't enough to try and deny health care to tens of millions of Americans putting their health and lives at risk, Health and Human Services then took their brutality global, using successful ploys like "victimization" and "resentment" to win over support:

The Department of Health and Human Services, the lead agency in the effort to modify the resolution, explained; “The resolution placed unnecessary hurdles for mothers … These women should … not be stigmatized...”

The confrontation was the latest example of the Trump administration siding with corporate interests on numerous public health and environmental issues.

In the end, the Americans’ efforts were mostly unsuccessful. It was the Russians who ultimately stepped in to introduce the measure — and the Americans did not threaten them. “We’re not trying to be a hero here, but we feel that it is wrong when a big country tries to push around some very small countries, especially on an issue that is really important for the rest of the world.” 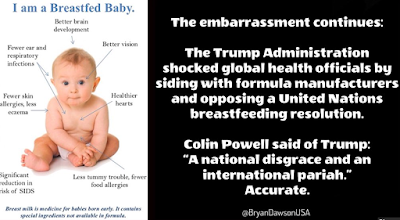 That’s not all, the U.S. tried to require the words “evidence-based” to breastfeeding, meaning ethically challenged double-blind studies would have to be conducted:

The United States also insisted that the words “evidence-based” accompany references to long-established initiatives that promote breast-feeding, which critics described as a ploy to undermine programs...Scientists are loath to carry out double-blind studies that would provide one group with breast milk and another with breast milk substitutes. “This kind of ‘evidence-based’ research would be ethically and morally unacceptable,” Ms. Sterken said.A 2016 Lancet study found that universal breast-feeding would prevent 800,000 child deaths a year across the globe and yield $300 billion in savings from reduced health care costs and improved economic outcomes for those reared on breast milk.


The Americans also sought, unsuccessfully, to thwart a W.H.O. effort aimed at helping poor countries obtain access to lifesaving medicines. Washington, supporting the pharmaceutical industry, has long resisted calls to modify patent laws as a way of increasing drug availability in the developing world, but health advocates say the Trump administration has ratcheted up its opposition to such efforts.

This wasn't the only time Trump took a stand against breastfeeding:


Donald Trump had an "absolute meltdown" when a lawyer requested a break from a 2011 deposition to pump breast milk. "He got up, his face got red, he shook his finger at me and he screamed, 'You're disgusting, you're disgusting,' and he ran out of there," attorney Elizabeth Beck told CNN's Alisyn Camerota on Wednesday morning.

Republicans against Breastfeeding, but love "small government?" In New Hampshire, back in December of 2015, this exchange tragically happened: 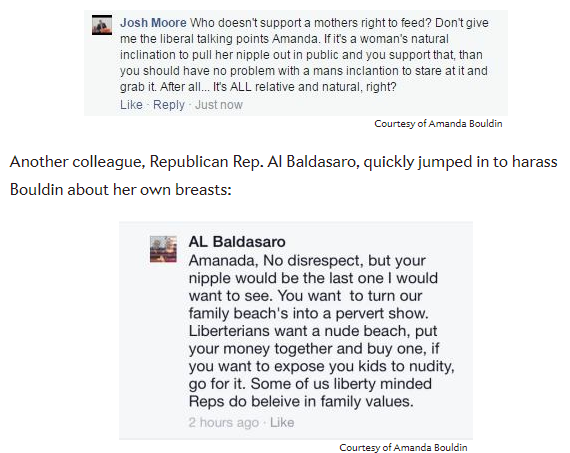