My Trumpian conservative friend in Milwaukee just emailed me the latest conservative outrage blaming Facebook for removing a part of the Declaration of Independence for dated racist references... 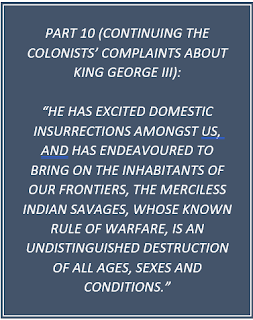 But it only made sense...here's why, from SNOPES:

Misdirection Play; Trumpian MAGA losers may want to hold back their outrage, and be just a little embarrassed for their own unAmerican mistake, which was a whole lot worse:

Across the nation, citizens will gather to celebrate the birth of the nation with fireworks and apple pie; and they will watch, once again, as Donald Trump supporters accuse National Public Radio of inciting a treasonous uprising against the president by tweeting out the Declaration of Independence.

As per its own annual tradition, NPR last year tweeted out the Declaration of Independence line-by-line ... Defenders of the president attacked NPR for “calling for a revolution” by tweeting phrases like “A Prince whose character is thus marked by every act which may define a Tyrant, is unfit to be the ruler of a free people.”

Labels: Declaration of Independence
Email ThisBlogThis!Share to TwitterShare to FacebookShare to Pinterest