BREAKING - 7/5/2018: I guess you can forget everything I wrote below now because no one from Harley-Davidson asked for Walker's help to say something...anything?

Republicans botched it up again, this time with the new and growing hemp farming industry in Wisconsin. Frightened Republicans stayed clear of "hemp" for decades, too similar to pot, while other states were drowning in the agricultural cash. In fact, they thought other farmers might treat many of their hemp growing neighbors as criminals and druggies.

Shhh! It's a Hemp Farming Secret: You won't believe what they wrote into the law legalizing hemp farming:

The new law legalizing hemp keeps confidential all contact information for hemp growers and processors in the state. This makes it difficult for farmers to find buyers for their crops in Wisconsin.

Rob Richard of the Wisconsin Farm Bureau Federation (WFBF) and Senior Director of Government Relations: “We were concerned growers would be harassed by people who didn’t understand hemp. Perhaps lawmakers should rethink keeping hemp growers and processors confidential ... allow farmers and processors to “opt in or opt out of public information so growers can access the list.”

Walker oblivious to growing Dairy Farm Immigrant Labor Shortage: On separating immigrant children from their parents and the state's dairy farm dependence on immigrant labor, Scott Walker is nowhere near sounding the alarm to fearless leader Trump on border and trade policy. It's all election year photo op headlines and talking points. This is a red alert problem Walker doesn't see as an insane policy, like it has nothing to do with Wisconsin:


Half of all workers on U.S. dairy farms are immigrants, and the damage from losing those workers would extend far beyond the farms, nearly doubling retail milk prices and costing the total U.S. economy more than $32 billion, according to a new report commissioned by the National Milk Producers Federation ... 80 percent of dairy farms surveyed continue to hire immigrants ... More than 7,000 dairy farms would close ... It concluded that a complete loss of immigrant labor could cause the loss of one-in-six dairy farms and result in 208,000 fewer jobs nationwide. Some 77,000 of the lost jobs would be on dairy farms.

And Trump's reckless and ever-changing tariff war that's negatively impacting Walker's own rural farm voters...that's something far off in the future for Scott Walker. Like Walker said, if we had no tariffs, that would be better. That's a position? And anyway, he can always pass the blame off on Trump later, keeping his own reputation intact. Peas in a pod here:

"Foxconn Walker abandons Harley-Davidson too: Walker did the impossible; he made bringing an industry leader like Foxconn to Wisconsin a nerve-wracking divisive decision that should have been welcomed with open arms. Who does that?

So it should come as no surprise Walker never thought to defend Harley-Davidson from leader Trump's trade war. Asked specifically about Harley, Walker repeated the same pat answer from the previous video...uh we're talking about Harley, remember?:


Walker praised Trump's negotiating position during a luncheon with other governors at the White House. "The best thing you said at the G7 is the ultimate goal is let's just get rid of all tariffs," Walker told Trump. "You were brilliant to point that out. That's the ultimate answer."

With Walker's support and lack of concern for Harley, Trump felt compelled to double down.

Trump has no idea what makes Harley so unique, why it's not like any other motorcycle on the market. Incredible, and a reason Walker should be on the front lines saying something...anything?

Apparently, no one would dare try and correct Emperor Trump, or maybe google a few simple charts. Wisconsinites have been reading about Harley's falling profits for years, and the growing markets around the world: 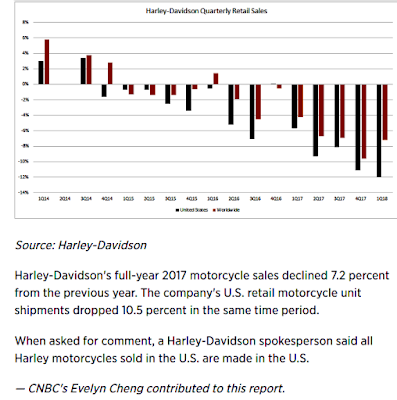 “Harley’s primary issue is U.S.-related due to shifts in demographics, which began well before any talks of tariffs and trade wars. Trump’s reaction seems emotionally charged. Harley is simply playing the hand Trump dealt them,” Bernstein analyst David Beckel said.

Trump on Tuesday also appeared to incorrectly tie Harley’s June announcement to its sales last year, saying Harley customers were unhappy with the move and that sales had fallen 7 percent in 2017.

Benn Steil, the director of international economics at the Council on Foreign Relations, joked that the Harley customers must be psychic.


"To punish Harley-Davidson for shifting production out of the US in response to Trump's trade war, Americans went back in time to reduce the company's sales in 2017 — the year Trump thanked them for building in America. Astounding!"