Walker throws taxpayer funded lifesaver to ACA Marketplaces while readying torpedoes to Sink ObamaCare. You Can't make this stuff Up.

This is so Republican; spend, spend, spend on ACA Marketplaces using taxpayer dollars in the most inefficient way, with no cost controls and no sustainable workable structure. 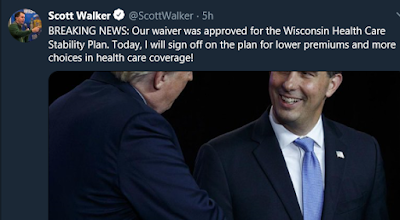 Gee, thanks Scott for saving us from your own Trump Party's dismantling of the Affordable Care Act? It's another desperate election-year scheme that never would have happened otherwise:


President Trump finally made good on his promise to yank funding from a key set of Obamacare subsidies. The administration would immediately stop supporting the cost-sharing subsidies that reimburse insurers for reducing the deductibles and co-pays of lower-income Obamacare enrollees. Trump has been paying the subsidies on a month-to-month basis, unnerving many insurers.


Walker gave Wisconsin Attorney General Brad Schimel permission to join with attorneys general from other states to file a lawsuit against the Affordable Care Act.


The Trump’s administration has signed off on Gov. Scott Walker’s $200 million reinsurance plan to lower Obamacare premiums ... consumer costs are expected to go down by 5 percent next year for individuals through the marketplaces established by Obamacare (TRUMPCARE).

...for actually NOT solving a problem he and Trump created? Amazingly, the Journal Sentinel was all too happy to use Walker's own skewed estimates:

According to estimates conducted for the Walker administration, the plan will lower monthly premiums in the state's Obamacare marketplaces to a projected $721 per consumer per month next year. That would be a reduction of more than 5 percent from the monthly fee of $762 now being charged.

Nope! Here's what Trump Republicans ADDED to TrumpCare costs per Congressional District, even with Walker's plan. These are the excess costs. Thank you Scott Walker and Trump:

$200 million here, $10 billion there...imagine saving all that with National Health Insurance for all: With state and local government pensions straining and coming up short for retiree health care, not to mention the heavy burden on businesses, piecemeal health insurance needs one single universal plan. And how about veterans? We could take this off the table as well..:

Politico: Trump signed into law an updated version called the "VA Mission Act" that took away those specific parameters and made seeing a doctor in the private sector easier for veterans … giving veterans more choice in their health care. The program will then need close to $10 billion for each of the next two years to keep running. Veterans advocacy groups': "We are very concerned that without assurance of sufficient funding, reform and modernization of the VA health care system – which millions of ill and injured veterans rely on – could be delayed or endangered."

Without expanding health care, we could return to this pre-ACA 2013 map of uninsured Wisconsinites: 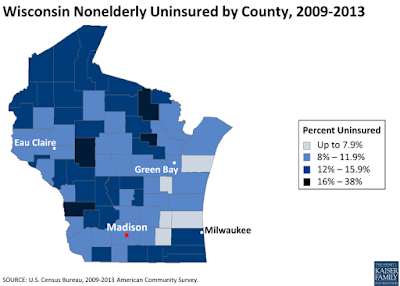 Or try expanding coverage...because the ACA was working: 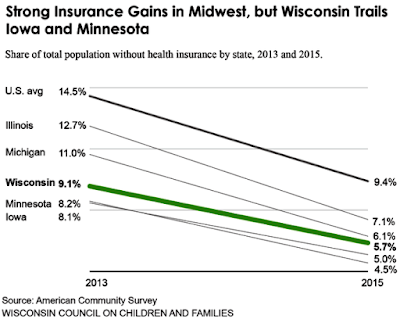