I have supported rural voters for years, offering solutions and recognizing their problems with disappearing schools and teachers, broadband, roads, the loss of dairy farming, mining, and contaminated drinking water, but after witnessing their recent blind allegiance to our grifting president Trump, I'm wondering why I should care. They've invested more into being true believers than they have trying to solve their own problems, giving Trump unthinkable latitude than is rationally healthy.

Yet just by coincidence, the trade war isn't hitting Ivanka Trump. Funny how that works:


Donald Trump’s tariffs on Chinese goods won’t touch Ivanka Trump’s foreign-made products for her fashion line. While Trump rails at Harley-Davidson motorcycles for moving some production to Europe to dodge EU tariffs, the first daughter and senior White House adviser has never manufactured a single product for her Ivanka Trump brand on American soil. Trump enacted tariffs Friday morning on $34 billion worth of Chinese goods, affecting hundreds of products from boats to medical devices and auto parts. Products spared include those manufactured by his daughter.

Farmers Blindly Stand with Trump: Yes, many rural voters bought the idea that Trump was a successful businessman. Sure, if just naming buildings, building hotels and failing in the casino business with no responsibility to shareholders...or anyone for that matter instills confidence and certainty, Trump's your guy: 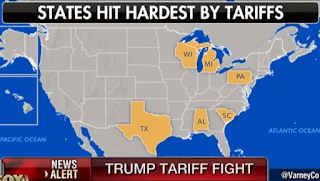 Not everyone is buying this is a crisis. Standing on the edge of his bucolic dairy farm close to Sartori’s cheese plant, Scott Ditter, a dairy farmer with 60 cows whose sole client is Sartori, is unfazed.

“This guy is smart,” says Ditter. “He’s got a plan. That’s why he does what he does. He’s a rattler and he knows how to rattle cages." It is time that the US’s “so-called trading partners” cut the US a fair deal, he says. "China literally rapes American companies of their technology." The cards have been stacked against the US for too long, Trump’s tariffs will finally force its trading partners to deal fairly, he believes. There’s too much milk out there as it is and some farmers will fail, they would have anyway, says Ditter. For him a bit of pain now is worth it if Trump can get a better deal for the US. “A lot of farmers I speak to think we are doing the right thing, putting our foot down and saying enough is enough,” he says.


WSJ: Analysts say that unless an international court sides with the United State’s position that all cheese names are generic, no one is sure when the naming problem will get fixed.

The U.S. has been battling the EU over the geographic naming restriction. Sartori Cheese's president Jeff Schwager says the EU got the upper hand by taking an aggressive approach toward completing agreements with almost all of trading partners ... Since the agreement was signed, the EU’s share of the imported cheese market in Canada has climbed 12 points to 70 percent, he said.

The EU-Mexico deal includes a provision restricting Mexico’s other trading partners from selling products with names that correspond to a region in Europe. The EU’s trade agreement with Mexico also prohibits U.S. cheesemakers from using protected names in marketing campaigns ... So after Sartori renamed its Asiago sold in Mexico to Sartiago, it couldn’t run ads in Mexico saying, “Our Asiago is now called Sartiago.”

Cattle Ranchers Blindly stand with Trump Too: No regrets voting for Trump, they don't blame him, they're hoping for more of those rumored accomplishments tied to his legend...not the bankruptcies or contractor lawsuits left in Trumps wake.