I found this video just the other day, and now I'm glad I did. A leaking Endbridge double pipeline through the straight of Mackinac would be an environmental disaster. This pipeline is 60 years old... 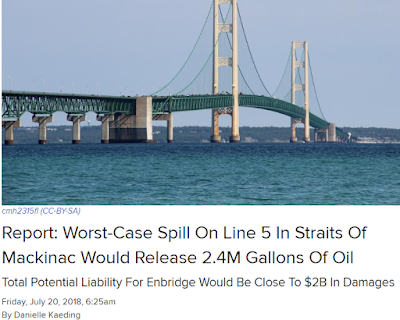 WPR: A new report details more than 2.4 million gallons of oil would be released into Lake Michigan and Lake Huron if a worst-case spill took place on Enbridge Energy's Line 5 in the Straits of Mackinac.

The single greatest distance of oiled shoreline in one worst-case spill scenario spanned west along the Lower Peninsula of Lake Michigan and Wisconsin, causing an estimated $1.37 billion in damage. The total liability for Enbridge in a worst-case spill could climb to nearly $2 billion when factoring in cleanup costs, lost income and other damages.

National Wildlife Federation spokesman Drew YoungDyke said the report illustrates the danger of having twin pipelines along the lake bed. "There’s 60,000 acres of rare habitat for fish and wildlife that’s threatened and 47 species of concern," he said. "When you look at those numbers and that risk ... that is certainly too much to risk for the marginal benefit that anybody receives from Line 5."