Here's a couple of topics I want to clear off the table as the new week begins: 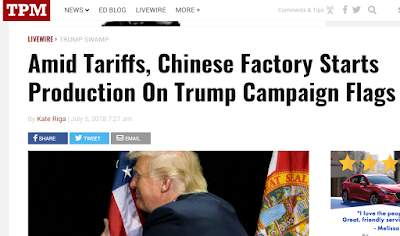 As President Donald Trump levies tariffs and threats against China for “stealing American jobs,” a Chinese factory says it’s been hired to manufacture flags for Trump’s 2020 campaign, according to a Tuesday episode of NPR’s “Indicator” podcast.

Factory owner Li Jiang told NPR that his workers are producing hundreds of thousands of blue and white Trump flags similar to those they manufactured for his 2016 campaign.

Pro-Life they Ain't: For years I've been saying supposed pro-life groups really aren't what they say they are, since so many more people are dying from guns, lack of healthcare, and polluted air. They could equally take on these issues if they wanted to but instead chose to totally ignore life after birth. Thank you, Michelle Wolf, the right wings latest declared enemy of freedom: 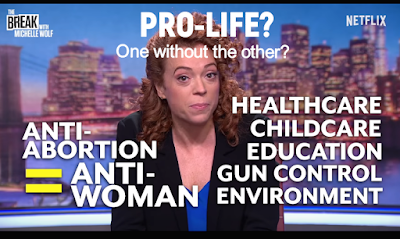 “I know some people call themselves ‘pro-life,’ but pro-life is a propaganda term that isn’t real, like healthy ice cream and handsome testicles,” she said on “The Break.” “Get the terminology straight.” Then she really unloaded:

Robotics/Automation killed Clinton's chances in Wisconsin: While most of us still get angry over offshoring and cheap overseas labor replacing the U.S. workforce, we never noticed...the robots:

The big picture: In a new paper in the Oxford Review of Economist Policy, U.K. economist Carl Frey and two co-authors argue that the 2016 U.S. presidential election — and the effects of industrial automation during the decades before — may be a signal of worse to come.

To assess any link between automation and the 2016 election, the authors used local mechanization data from the International Federation of Robotics and county-level voting data from Dave Leip's Atlas of U.S. Presidential Elections. They say they controlled for other factors in joblessness — like offshoring of manufacturing and trade deals. Among their results:


1. There is a correlation between automation in the years before the election, and how people voted.

2. At a 10% lower robot exposure, Michigan would have swung in favor of Clinton.

3. If robots barely increased in the years leading up to 2016, Clinton would also have won Pennsylvania and Wisconsin.