"Keep America Great?" Let's hope that the 19-29 percent of hardcore Trump worshipping "Americans" don't somehow get this guy elected again. In that spirit, Trump's 2020 reelection is starting off with an ominous parody slogan pulled from an unsettling dystopian movie reflecting Trump's presidency:

Apparently unbeknownst to Trump, his lawyer and The Washington Post, the slogan had already appeared in a poignantly titled 2016 horror movie: “The Purge: Election Year.”


With the release of “The First Purge,” the latest installment in the 5-year-old dystopian franchise about government-sponsored killing sprees, you might be wondering, “Huh, is President Donald Trump still planning on using that ‘Keep America Great’ slogan that was ripped straight from the horror movies?” Well, readers, he is.

Tump Mouthbreathers Love Author Trump: The actual author of the Art of the Deal told by fans he didn't write the book: 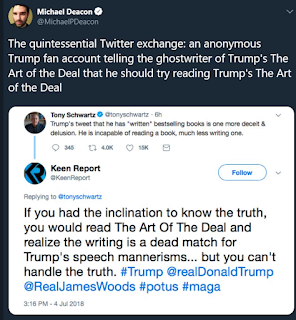 Trump, facing a crowd that had gathered in the lobby of Trump Tower, on Fifth Avenue, laid out his qualifications, saying, “We need a leader that wrote ‘The Art of the Deal.’ ” If that was so, Schwartz thought, then he, not Trump, should be running. Schwartz dashed off a tweet: “Many thanks Donald Trump for suggesting I run for President, based on the fact that I wrote ‘The Art of the Deal.’ ”