Senate candidate Kevin Nicholson was trained to be a "weapon" and rifleman when he served in the Marines. That fighting mentality changed Nicholson's ideological world view, from Democrat to Republican. Once a Marine, always a Marine, and that's why he's more qualified than Sen. Tammy Baldwin.

My dad was a decorated Marine and survived a round through his chest. I don't remember him saying he was better or more qualified then any other American. That's why I'm skeptical of anyone who brags about serving in the armed forces, expecting a whole bunch of hero worship, and suggesting they're so much better. That's Nicholson. VoteVets wants you to know... 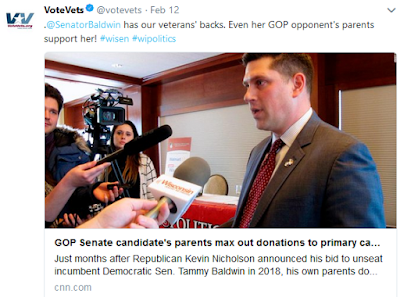 Nicholson Divides Family over Trumpism: After the news hit the fan about Nicholson's parents donating lots of money to his opponent Senator Tammy Baldwin, Nicholson showed his true colors in a Fox News interview that was not just sad, but revealing; his politics resulted a family split with his liberal parents. It's pretty bad when your own parents can't talk to you anymore. Even worse, Nicholson makes no mention of his parents or childhood at his campaign site.

As he tells it, Kevin Nicholson wife, kids and that Marine Corps experience that ripped away his "illusions," made him a better parent than his own mother and father. Even the Fox host stepped in defending his family, reminding Kevin that they also had life experiences that made them who they are...Democrats. Nicholson's words of wisdom and advice to becoming a Republican?

Too bad Donna and Michael Nicholson, who continue to wallow in their world of illusion, missed out on so much. That goes for most of us.