Paul Ryan has been exposed, finally, once and for all, done, we now know who and what he is...TOAST. Can you relate... 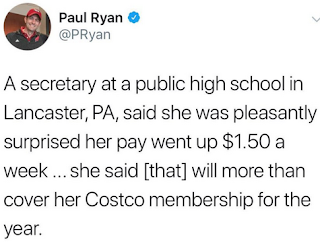 Sure, pretty disconnected from real people. And the sh** hit the fan:


Last week, in a tweet as tone-deaf as it was condescending, Speaker of the House Paul Ryan (R-WI) sparked national controversy by attempting to use the fact that a secretary at a public high school in Lancaster, Pennsylvania got a $1.50 raise per week as proof that the recently passed Republican tax plan is working perfectly.

And it got worse when the secretary he was talking about came forward: 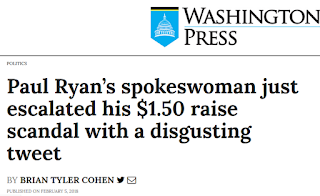 While Ryan faced backlash so severe that he ultimately deleted the tweet, his spokeswoman, AshLee Strong, didn’t quite get the memo. She took to Twitter today to post a deliberately misleading tweet, claiming that “successful NYC/DC dwellers” are mocking “an extra $1K.”

Of course, Americans are not mocking an extra $1,000 in their pockets. They are mocking Ryan’s $1.50 weekly wage increase, which amounts to a not-so-staggering $78 per year. Her disingenuous response only reignites what was viewed as a wholly out-of-touch tweet by the Republican Speaker of the House.

Paul Ryan and his staff may try to pander to everyday Americans, but their deceitful tweets prove that they speak for no one but themselves.


Only a dismal two percent of Americans have benefited from the tax plan with raises or bonuses, and in every case, the raise or bonus was only a mere fraction of what each company was benefiting. Furthermore, most of the employee benefit was temporary; many companies have only announced one-time bonuses, as opposed to permanent raises.

While many others reap the benefits...guess who:


By lowering the corporate tax rate, America’s biggest companies will be able to add a windfall of cash to their bottom lines. Exxon got $5.9 billion, Pfizer got $22 billion, Merck & Co got $22 billion, and AT&T got $20 billion. The Koch brothers made off with $1.4 billion. Essentially all of the money from the Republican tax overhaul padded the company’s profits, as opposed to translating into permanent wage increases for its employees.