The eventual decline of all things Wisconsin is accelerating, but will voters notice how fast in time for the midterm elections. The shortfall in road funding, state parks, water and air policy, and now the University of Wisconsin.

The pathetically easy answer for Scott Walker, requiring no thought process whatsoever, was to simply freeze tuition. Because as we all know, cost-of-living, advanced technology, competitive educator salaries, and maintaining aging infrastructure aren't real considerations...oh wait, until Foxconn burst on the scene.

And no one saw this coming? 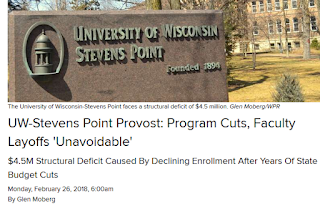 Greg Summers, UW-Stevens Point provost and vice chancellor of academic affairs, said years of state budget cuts and tuition freezes have compounded the university's financial problems ... "We've had years of shifting of public funding away from universities and the resulting need to look more at tuition dollars to supplement budgets. Given the tuition freeze that we've been in for five years now, that's put a pinch on possible revenues. In the 1970s the university received about 50 percent of our budget from state sources. Today that number is down to about 13 percent."

According to numbers supplied by the university, the school has been hit with more than $9.6 million in net state budget cuts since the 2011-12 school year. In the 2015-16 school year, state cuts to UW-Stevens Point's general purpose revenue was more than $5.75 million with an additional $570,500 in cuts to segregated program funds.

It's beyond frustrating to watch Scott Walker and the Republicans scramble to attract college educated Millennial's from out-of-state, after wildly slashing UW funding based on partisan attacks.