Say, can we have a do-over on this?

Walker to Cost State Millions, Again: We could have had a high speed rail line between Milwaukee and Chicago funded by our own federal tax dollars. We are now talking about state tax dollars paying for a much slower version of mass transit:


Wisconsin Transportation Secretary Dave Ross said the state is looking at increasing grants to develop pilot programs for mass transit in southeastern Wisconsin ... tasked by Gov. Scott Walker to develop a plan to transport workers in Milwaukee to the Racine and Kenosha area ... it underscores the importance of this issue to ensure that we are meeting the region's workforce need," said state DOT Public Affairs Director Becky Kikkert

Remember, Back on July 30, 2011, the Milwaukee Journal Sentinel wrote this: 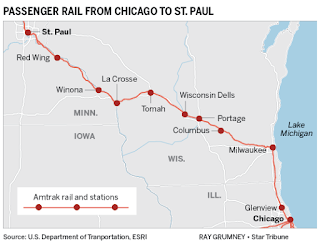 GOP legislators halt Minnesota-Wisconsin high-speed rail study...Critics say exploring route from Twin Cities to Milwaukee is pointless. In December Republicans Rep. Paul Torkelson and Sen. Scott Newman objected to the Minnesota Department of Transportation (MnDOT) accepting federal grant money to complete the study — largely because Wisconsin opposes high-speed rail ... work on the study has stopped after just over $1 million in state and federal money had already been spent on it.

The United States has no true high-speed rail service. A report by the Midwest High Speed Rail Association attributes this to a lack of funding, the difficulty of getting state, local and municipal governments to agree on a plan, and outdated safety regulations and infrastructure.


"What we need to do is make some really wise investments to move people to training and to work," said Ross. "Our goal in coming up with that plan is so we can roll that very same plan throughout the rest of the state." Ross made the comments before northern Wisconsin leaders in Madison during the annual grassroots lobbying event Superior Days. Superior Mayor Jim Paine and city officials want the DOT to fund a pilot program to pay for expanded bus routes between Superior and Duluth.

Superior, along with Duluth, are desperate to get their economies working together again. But they may not be getting that pilot program from Walker after-all. On top of that, Trump has flipped around the federal funding formula, from 80 percent to just 20 percent. That's a problem:

The Northern Lights Express would run along existing BNSF railway track from the Twin Cities to Hinckley, Minnesota, at which point it would cross the border into Wisconsin and stop in Superior and Duluth. Superior Planning and Ports Director Jason Serck said that passenger rail could boost the city’s economy ... the prospect of a 90-mph train whistling into a stop in downtown Superior before bending across the Grassy Point Bridge and heading to the Duluth Depot. That means securing federal funding expected to cover 80 percent of the total project development cost, estimated at between $500 million and $600 million.

High Speed Rail was the Game Changer...oh well: Never one to look ahead, Scott Walker appealed to his low information voting based by trashing high speed rail: 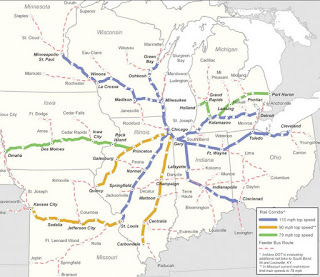 The new governor - who railed in his campaign about the "boondoggle" that would bring $810 million in federal money for the rail project (wants to) stop the rail line, intended ultimately to link Chicago and Minneapolis (That means the state would lose) $82 million for upgrades to the current Milwaukee-to-Chicago train service that would have been covered as part of the rail funding).

To opt out of the project would be like Wisconsin opting out of the interstate highway system in the 1950s.

Wispolitics: Transportation advocates, workers and state leaders released a report today entitled “The Economic Impacts of High Speed Rail: Transforming the Midwest” showing that expanding passenger train service in Wisconsin and the Midwest can create 103,000 jobs and $13.8 billion of economic activity in the region. “The communities I represent rely on a freight rail network that provides an essential connection for rural manufacturers that support thousands of jobs,” said Rep. Fred Clark (D-Baraboo). “Communities like Wisconsin Dells and Portage would benefit directly and immediately from an enhancement of our passenger rail system.

Jsonline: Walker turned down $810 million for upgrading rail in Wisconsin, with only a small percentage of maintenance costs shared by the state. Walker has said he doesn't want the state to pay $7.5 million a year in operating costs. A state transportation official has said federal aid could cover as much as 90% of that amount, as it does with the Hiawatha.

Walker Spent a lot of taxpayer money to give up $810 million. What a Deal: Walker and the Republican legislature made their point, believe this or not, by actually walking away from the $300 million already spent on bring high speed rail to Wisconsin. From Upfront with Mike Gousha (goo-shay):


Fitzgerald: "If we have to pull the plug, it would once again demonstrate how wasteful how some of these stimulus dollars are..."