Maybe the mass shooting issue will finally focus the nations attention on just how inhumane the Republican Party has become, and how sold out it is to NRA business interests. Hell, what percentage of the economy is dependent on firearms manufacturing anyway?

One irony: Republicans who pushed that mindless "civics test" to graduate, who also didn't know ours schools already have detailed U.S. history courses, may be getting activist teenage blow-back from a very educated electorate. How about that!


Less than a week after a shooter killed 17 people at a school in Florida, the state's House of Representatives voted not to discuss a ban on assault weapons after earlier declaring pornography a health risk, angering people on social media. 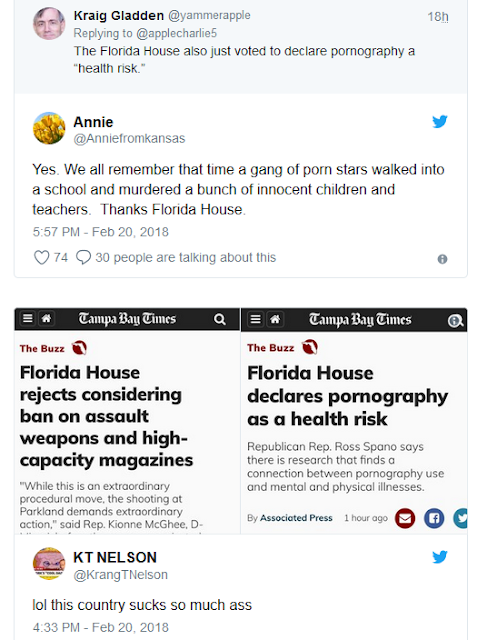 A high school students response to the "adults" in the Florida legislature?

House Speaker Paul Ryan called the shooting “horrific,” but said Congress shouldn’t do anything until it has “all the facts and data.” There’s just one problem with that: The GOP, at the behest of the National Rifle Association (NRA), is blocking scientists from producing the “facts and data” on gun violence.

Thanks to the Dickey Amendment — a 23-word rider attached to a spending bill in 1996 and enacted in 1997 — research on gun violence has been frozen for two decades. As a result, gun violence was the least-researched cause of death in the U.S. over the past decade, and the answers to even the most basic questions about gun violence prevention remain elusive.

Fox News' Shep Smith railed against the idiocy of the amendment.


“Forget your political arguments. Why can’t we come together as a society and say ‘No, we’re going to study this, we’re going to research this, we’re going to bring our best and brightest together and put them in a room and give them whatever they need to figure out why are our children killing each other more in the United States than anywhere else in the world?' We change the course of human events around the world. We put a man on the moon 50 years ago and we can’t figure out why only our children are running around in their schools killing each other. It doesn’t happen everywhere else. It happens here. Why can’t they put the best and the brightest together to research it, to figure it out, and help us stop it? We’re failing our children."

MSNBC's Nichole Wallace and Steve Schmidt called it like it is; a big GOP problem:


MSNBC's Nicolle Wallace has had enough of Republicans feigning concern about gun violence and doing nothing ... students and parents are holding Republican politicians accountable for inaction ... Republicans are not just refusing to help, they are responsible for the bloodshed. And as a “non-practicing” Republican, Wallace said, she shares the “culpability of a party being held hostage by the NRA.”

“The NRA is a gun lobby out of step with the vast majority of its members that support more common-sense gun measures. Most gun owners are for things like gun locks and gun safes. Most gun owners are for background checks. Democrats who are for gun control are fine with doing more for the mentally ill, but Republicans who are for doing more for the mentally ill never, ever, ever, ever want to have gun control. When is the Republican Party going wake up and realize it has blood on its hands?”