Nation wakes up to Paul Ryan's record of Inhumane acts against Women, the Poor, and Jobless!

Being the speaker of the House is bound to bring out critics, but Paul Ryan has accomplished something more than that, and it has been one thing after the next.  The latest:

“What this is not is an indictment of our institutions, of our justice system,” House Speaker Paul D. Ryan (R-Wis.) said Thursday about the now infamous “Nunes memo.” “It does not impugn the Mueller investigation or the deputy attorney general,” the speaker insisted. Is this cynicism or naivete? Discrediting law enforcement is the memo’s transparent purpose and why it has been embraced by President Trump.

Another way of putting Ryan’s statement; give the Republican memo mileage and media spin. Oh, and Ryan quickly contradicts his previous claims it does nothing to impugn the investigation: 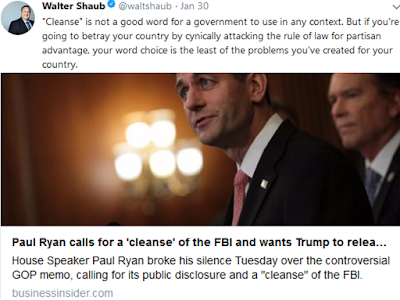 Mr. Ryan bears full responsibility for the deterioration of congressional oversight of intelligence operations ... Ryan’s aid and comfort is helping Mr. Trump impede an investigation into these very issues. It is sad to see the speaker allow the House to be tarnished in this way.

This memo will actually prove political bias in all of those places, Trump suggested:

The top Leadership and Investigators of the FBI and the Justice Department have politicized the sacred investigative process in favor of Democrats and against Republicans - something which would have been unthinkable just a short time ago. Rank & File are great people!
— Donald J. Trump (@realDonaldTrump) February 2, 2018

Ryan Pushes Job Training for Food Stamps...and to cut Budgets: Imagine suggesting that every Kimberly-Clark worker who is losing their job was lazy, needed drug testing and had better get in line for job training if they want to see any benefits. That's 600 newly unemployed Americans. Never mind their current skill levels were just tossed away like trash, leaving families struggling to find a way to stay in their homes and pay their bills during a time of record low unemployment. Note: Ryan rolls out the "skills gap" myth again: 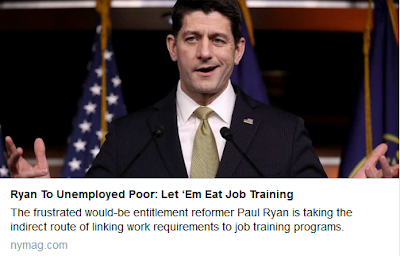 [T]he Wisconsin Republican is back at it again, repackaging his proposals … urged congressional Republicans to tackle “workforce development,” … a matter of “helping people”— not a budget-cutting excursive. What Ryan is deploying is a massive bait and switch: Get people talking about beefing up job-training resources for the able-bodied unemployed or underemployed poor. Phase one … would be work requirements. More generally pushing people out of entitlement benefits and into jobs that may or may not exist requires more cover.

He pointed out that there are 6.6 million people on unemployment and more than 5.8 million open jobs. That skills gap, he said, could be filled by the unemployed population if the government provided the facilities to link the two.

Lawmakers from both parties and at every level of government have struggled for decades to come up with a successful system for job training. The Manpower Training and Development Act of 1962, the Comprehensive Employment and Training Act of 1973, the Job Training Partnership Act of 1982, and the Workforce Investment Act of 1998, have all, according to nearly every assessment, largely failed to address the enormous problems for workers caused by automation and globalization.

If Ryan has some brilliant ideas for overhauling this system, we’d all like to hear them. But if talk about job training is just a pretext for cutting benefits, then it’s just the same old same old from the inveterate enemy of the welfare state.


In October 2017, members of the House of Representatives passed a bill that would prohibit abortions after 20 weeks of pregnancy … you might not hear much about this draconian measure or the junk science used to justify the harmful and medically unnecessary restriction. Unfortunately, right-wing media are taking full advantage of the silence since last October.

Twenty-week abortion bans are built on the inaccurate claim that fetuses can feel pain by 20 weeks in pregnancy, despite the wealth of scientific evidence to the contrary that such claims do not track with the majority of scientific consensus. As The Daily Beast explained in a May 2016 article, one researcher “told The New York Times that his frequently-cited research ‘did not deal with pain specifically’” and was being misrepresented by anti-abortion advocates.

A ban on abortion at 20 weeks would disproportionately impact low-income people. As the Guttmacher Institute explained, these patients may have to delay an abortion to later in pregnancy “because they had difficulty raising funds for the procedure and travel costs, or because they had difficulty securing insurance coverage.” But anti-choice politicians and right-wing media frequently vilify people who have later abortions and largely ignore the reality that people who seek these procedures do so for a variety of personal and medical reasons.

It's not hard to see Ryan's stark disconnect from the hard realities every American has to deal with outside the bubble in our nations capitol. Ryan isn't really a guy from Janesville, he's a paper thin two dimensional character ripped from an Ayn Rand novel: