Life expectancy in the U.S. is down for again...


...for the second year in a row, thanks to a combination of drug and alcohol use and suicides, according to a new report released Wednesday by the BMJ, formerly known as the British Medical Journal.

You want to know why?


By far, the report found it's a rural issue more than an urban one. "The problem is concentrated in rural, largely white counties that have often struggled for many years with stagnant wages, unemployment, poverty and the loss of major industries that fueled local economies."

An Rural Problem: Hey that's not what Wisconsin Republicans have been saying for years. Let's reflect back to Rep. Bob Gannon (R-Slinger), who died in 2017. His GOP colleagues said they would miss his booming rhetoric...shaved head...a true champion and advocate of the conservative movement...candor and principled conviction." They also miss Gannon blaming black urban neighborhoods for our states problems. Here's the proof for resentful rural Republicans: 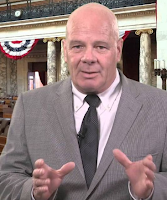 Gannon recently accused Democrats of blaming Republicans for "every malady known by man." Gannon focused on problems with unemployment and crime in Milwaukee's African American population, and said the city is "the anchor holding back the ship of state as far as jobs is concerned."

In his statement titled "Murder, Mayhem and Jobs," Gannon noted the state's job creation numbers would significantly improve "if only our largest city would clean up the murder and mayhem on their streets. Milwaukee leads in murders and mayhem per capita, with a large number of these crimes occurring in mainly black neighborhoods ... What employer will build or expand when they fear muggings, car jackings, attempted murder, or other serious criminal threats to their employees?"

Scott Walker Plays Rural Resentment Card: The shorter U.S. life expectancy report oddly and unintentionally pointed to Republican policies that rural conservatives can't seem to get enough of. And yet it's killing their communities and shortening their lives:

Steven Woolf at Virginia Commonwealth University, a co-author of the latest report said that "the root causes argue for policy solutions, especially those directed at strengthening the middle class that are not getting sufficiently prioritized by elected officials. The problem is concentrated in rural, largely white counties that have often struggled for many years with stagnant wages, unemployment, poverty and the loss of major industries that fueled local economies."

Yup, it's those rural "small government, low tax" communities that are always feeling forgotten where life expectancy rates have decreased. It's not terrorism, it's not illegal immigrants. It's GOP policies. The decline really took off during the Reagan years: 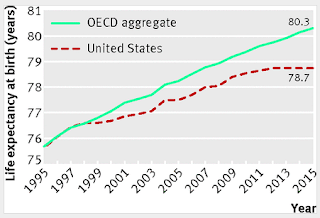 In 1960, Americans had the highest life expectancy, 2.4 years higher than the average for countries in the Organisation for Economic Cooperation and Development (OECD). But the US started losing ground in the 1980s.

Big surprise, huh? Now after the total abdication of the middle class and Republicans serving business only, Americans are dying sooner:


The idea of the "American Dream" is increasingly out of reach as social mobility declines and fewer children face a better future than their parents, Woolf said.

Life expectancy in the U.S. is now 1.5 years lower than a group of 35 nations known as the Organization for Economic Cooperation and Development, which includes Australia, Canada, France, Germany, Italy, Japan, Mexico, the Netherlands and the United Kingdom among others.


1. Americans have poorer health than other nations in many areas, including birth outcomes, injuries, homicides, adolescent pregnancy, HIV/AIDS, obesity, diabetes and heart disease.

2. Americans also engage in unhealthy or risky behaviors — such as high calorie intake, drug abuse, and firearm ownership — live in cities designed for cars rather than pedestrians or cyclists, have weaker social welfare supports and lack universal health insurance.

3. Not only more deaths and illness, but also escalating health care costs, a sicker workforce, and a less competitive economy. Future generations may pay the greatest price," the report concludes.


As for what to do about it, Woolf said that "the root causes argue for policy solutions, especially those directed at strengthening the middle class that are not getting sufficiently prioritized by elected officials."