The Florida school shooting is another unthinkable heart wrenching tragedy made worse by the knowledge no one in the Republican Party will anything about it...again. It's not just the NRA campaign money, but their rationalization that nothing can be done and will be done, or that treating the mentally ill will silence the even louder calls for rational gun control laws. Republicans proactively passed a law giving guns to those with dementia and mental illness.

Former Republican Rep. David Jolly of Florida is now openly advocating flipping the House of Representatives. Below is his advice to voters and to Democrats that makes sense. I know, Democrats have been saying this stuff for years, but as Jolly notes, this one is in the hands of the voters-flip the House:


Jolly: “And so if this is the issue that defines your ideology as a voter, there are two things I would suggest tonight. First, flip the House. Flip the House. Republicans are not going to do a single thing after this shooting we saw today. But I would also offer to Democrats, work for incremental wins."


Sen. Chris Murphy (D-Conn.) said on the Senate floor that mass shootings are "a consequence of our inaction."


"This happens nowhere else other than the United States of America — this epidemic of mass slaughter. It only happens here not because of coincidence, not because of bad luck, but as a consequence of our inaction. We are responsible for a level of mass atrocity that happens in this country with zero parallel anywhere else."

For a guy like Paul Ryan, who would be very happy seeing 26 million Americans lose their health care while cutting Medicare for seniors, this irresponsible and detached response makes it clear who he really represents:


Kind of makes this the argument about how money corrupts your moral and ethical values: 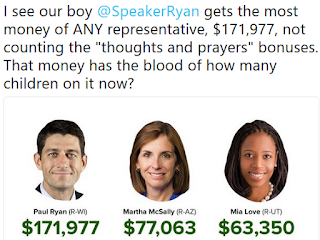 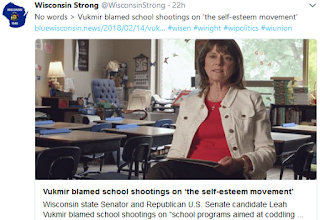 Vukmir wrote in the post about Columbine: “[O]ur national obsession with the feelings of teenagers has played an enormous but heretofore unrecognized role in what is transpiring nationwide. Unless we change our attitudes and approach to dealing with the normal developmental phase of [the] years known as adolescence, I fear another Columbine is inevitable.”

Vukmir criticized what she said was parents and administrators “coddling” teens’ emotions and making them “self-absorbed” rather than teaching them to roll with the punches. “It is under these circumstances that a despondent teen may find no other recourse but to lose control and act out violently,” she said.

There hasn't been a new federal gun law since 1994, because...we don't have a problem: 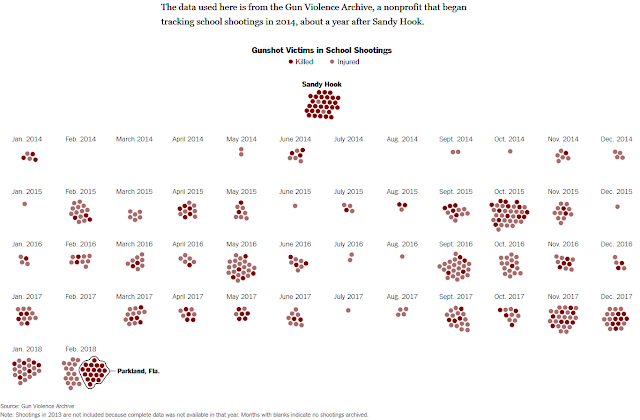 Yes, Something Can Be Done: The myth that nothing can be done to stop someone hell bent on committing a mass shooting is the wall Republicans love to stand behind. The facts say otherwise:


Europeans had school shootings, too. Then they did something about it. In Europe, there hasn't been a major high-casualty gun attack on a campus in almost a decade. Meanwhile, Wednesday's shooting in Florida was at least the sixth of its kind in the United States this year — 45 days into 2018.

In his famous study, “Public Mass Shooters and Firearms: A Cross-National Study of 171 Countries,” University of Alabama criminology professor Adam Lankford found a link between the number of guns and mass shootings that killed four or more people. The data set ranged from 1966 through 2012 ... a decrease in the number of weapons also would probably result in a decrease in shootings. That’s exactly what happened in Australia after the country tightened gun legislation following a mass shooting in 1996. Countries where gun ownership is rare, such as France or Britain, have largely been spared such catastrophic incidents.

Switzerland has one of the world’s highest ratios of firearms per person, Why has there never been a school shooting in Switzerland, despite the Swiss enthusiasm for weapons? Switzerland’s weapons are distributed to citizen soldiers, as they are known. Conscription is mandatory for male Swiss citizens, and conscripts can keep their semiautomatic assault rifles at home even after returning to their nonmilitary careers. (They still have to report for a short annual training). Meanwhile, those who wish to buy weapons themselves need to undergo a weeks-long background check.

Some sociologists say that Switzerland's military service comes close to an extended background check, too, and that the country's education system teaches children early on to search for compromises instead of risking open conflicts. Hence, while almost every home in Switzerland may have a weapon, access is still indirectly regulated. There’s also another crucial difference with the United States: extensive, mandatory health insurance, which allows schools to have direct and immediate access to psychologists and intervention teams. Psychological tests are also standard practice for Germans younger than 25 who want to purchase firearms. Age restrictions were tightened and a national registry of all weapons was created in 2013.

Conservative columnist Jennifer Rubin had this safety suggestion for lawmakers: