Wish we all had American Harvest Boxes? 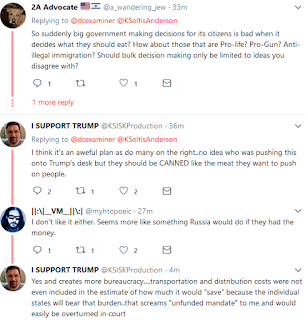 Mulvaney:“What we do is propose that for folks who are on food stamps, part — not all, part — of their benefits come in the actual sort of, and I don't want to steal somebody's copyright, but a Blue Apron-type program where you actually receive the food instead of receive the cash. It lowers the cost to us because we can buy [at wholesale prices] whereas they have to buy it at retail. It also makes sure they're getting nutritious food. So we're pretty excited about that.”

Aren't we all. Wait a minute, Republicans refused to negotiate drug prices because it was unfair for the government to contort the market and put private business at a major disadvantage blah, blah, blah...too bad for all those private sector grocery stores:


Mulvaney's remarks drew raised eyebrows from some critics, who accuse the Trump administration official of drawing an unfair comparison between the food stamp program, which delivers an average of $1.37 per meal to America's poorest, and a high-end meal kit that runs $10 per serving. Blue Apron found that four in 10 lapsed meal-kit subscribers dropped their service because they were too costly.

Idea who's time...wait, no ones been talking about this:


Agriculture Secretary Sonny Perdue said in a statement, "It maintains the same level of food value as SNAP participants currently receive, provides states flexibility in administering the program, and is responsible to the taxpayers” ... dubbed “America’s Harvest Box,” all households receiving more than $90 per month in benefits — 81 percent of SNAP households overall — would begin receiving about half their benefits in the form of government-purchased, nonperishable food items.

Right Wing Think Tanks Appalled Too: It's got to be pretty bad when the response from Redstate's Sr. Editor Ben Howe actually sounded like a reasonable common sense liberal:


Jim Weill, president of the Food Research and Action Center, described the proposal as a “a Rube-Goldberg designed system of commodity distribution via food boxes. [It] will be administratively costly, inefficient, stigmatizing, and prone to failur. [And it] will return the country to Depression-era anti-hunger approaches.”