Scott Walker's sudden whiplash inducing support of the ACA's marketplace is a shocking admission he's been wrong and knows it. But what's worse is Walker's desperate out-of-character scheme based solely on high priority polling data showing how badly Republican have abandoned their voters biggest concerns.

Can it get any clearer than this.

WisPolitics.com JR Ross explained why Walker flip flopped, so even low information "Stand with Walker" voters will get it; it's about polling demographics that contradicts the extreme GOP agenda. JS:


Ross: "Those suburban women we were talking...health care is their number one issue. If you look at some of the things that Walker proposed, a lot of them check boxes of demographics that they need come November...the rural economic development fund, that was a nod to rural voters who are going, 'hey, where's mine, we're worried up here when Foxconn gets $4.5 billion...One person told me that Republican got convinced because it's all polling. They saw what was going on out there, and they realized they needed to do something like this, and that helped to push this through."

Walker Supports...and wants to kill the ObamaCare Marketplaces? Having it Both Ways: The Journal Sentinel headline reflects down-the-rabbit-hole politics, and how bad Walker wants it:


“Our Health Care Stability Plan is our solution to Washington’s failure; we want to provide health care stability and lower premiums for Wisconsin."

Not only does Walker not mean what he's saying, but apparently, the changes Republicans pushed through in Congress didn't just weaken the health care law, they made it "no longer constitutional."


But Schimel, also a Republican, received Walker's sign-off to move this week in a different direction, leading a group of 20 states who are suing to block Obamacare entirely. Though Republicans in Congress failed to repeal the law last year, Schimel argues that they made enough changes that the law is no longer constitutional.


In a 2012 decision, the U.S. Supreme Court upheld the individual mandate in Obamacare by saying Congress had the authority to impose a tax on consumers who don't purchase health insurance. Last year, Congress and President Donald Trump eliminated the tax.

Schimel's lawsuit argues that because the tax has been dropped, the individual mandate to buy health insurance and, with it, the entire law are no longer constitutional.


It's the old Republican ploy; create a problem, then find away to avoid solving it.

Fitting perfectly in with the theme here, check out the latest from Brian Strassburg: 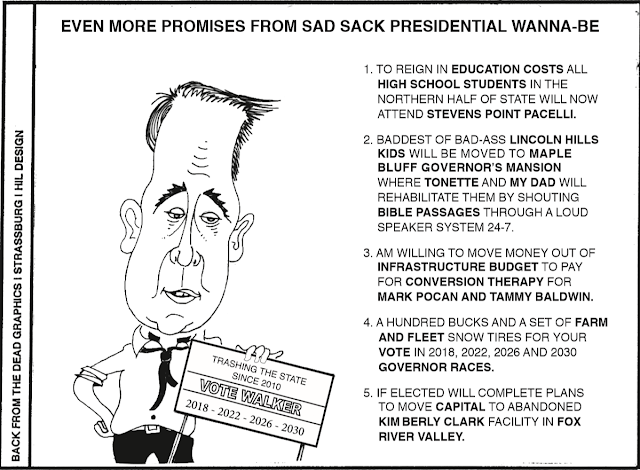