It was pathetic and funny in a bizarre way when Paul Ryan bragged about the CBO prediction that people would see lower premiums in 2026, all the while telling us how wrong they're predictions have been in the past. Ryan's loyal low information voters nodded yes anyway.

That same weird double speak flowed out of Scott Walker's twitter trolling this week. Except this time someone called him out on it. Check out Charles Gaba gofundme site and his official information page, ACASignups.net: 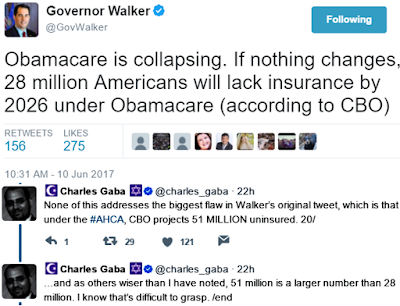 I liked this tweeted response GIF:

After 50+ attempts to repeal the ACA, a CBO score that predicted 24 million losing coverage, and administrative rules hanging in the balance under Trump, is it so hard to imagine insurers not just leaving the marketplaces but the entire individual market as well. This is a self fulfilling prophesy for Republicans, who finally utilized that ridiculous "market uncertainty" excuse to kill ObamaCare, for real.
Posted by John Peterson, Democurmudgeon at 6/11/2017 01:51:00 PM