I think it’s time to write following story the way the news media should have from the beginning, so here goes (quote is my emphasis)…

“Schimel ignored past court cases, other state laws and the Public Trust Doctrine of the Wisconsin Constitution, which all give the DNR authority to protect water resources...”

After being ordered to by…

“...Assembly Speaker Robin Vos (R-Rochester), chairman of the Assembly Committee on Organization, to ‘clarify’ the authority of the DNR over high-capacity wells.”

Clarity was a wink and nudge to pass and completely destroy the DNR, defying common sense and public responsibility. Leaving no one in charge...

"...Schimel concluded the DNR lacked explicit authority to place conditions on farms and or other entities that wanted to construct large wells — even if the wells harmed state waters."

Odd that after all this time, the state never found a way to protect the state drinking water supply.

Now there’s a 2016 lawsuit against that decision that hopes to reverse Rep. Vos' politically driven AG's right to plunder:

Employees of the DNR expressed concerns in emails in 2015 and 2016 about potential harm to lakes and streams from the construction of new wells in areas where irrigation was already widespread, court records filed on Friday show. The emails were included in the latest documents of a 2016 lawsuit by an environmental group and lake association that challenged a major shift in state policy that weakened the regulation of high-capacity wells. The October 2016 suit contends the DNR violated the Wisconsin Constitution and ignored other state laws and court cases after the agency announced it would no longer examine applications of large-scale wells by taking into account the impact of other nearby wells.

Destroying the Watchdogs; Scientists: Republican disdain for science is at a whole new level in Wisconsin, making it an environmental hell hole:

Two years ago, Walker and lawmakers enacted a budget that cut 18 DNR science service bureau researchers amid complaints that their research related to climate change, pollution and wildlife habitat were controversial and unneeded.

Now the science services bureau is being dissolved and its remaining scientists moved to program offices that use their research.

A frequent critic of the DNR said the move will give more control to DNR Secretary Cathy Stepp. Sen. Tom Tiffany, a Republican and part of the GOP majority on the Legislature’s budget committee, said Stepp should be able to ensure that research benefits sportsmen and the DNR should be better able to prevent further research that takes climate change into account.

Effective this year, the DNR will no longer offer fisheries, wildlife or environmental management booths, casting clinics, archery, a children's nature play area, Smokey's Schoolhouse and a number of other attractions. 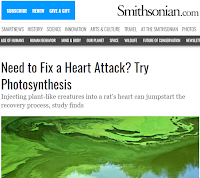 In a study published this week in Science Advances, Dr. Woo and his team show how they successfully replaced blood with microscopic cyanobacteria, plant-like organisms that also use photosynthesis. By co-opting the process to help heal damaged heart tissue, the team was able to protect rats from deadly heart failure. Fixing an ailing heart, it seems, may be as simple as shining a light on the situation.

For cardiologists, the challenge for preventing subsequent heart failure is to rapidly supply damaged heart tissues with oxygen and nutrients. But “if you look at nature, photosynthesis answers that question,”

Dr. Woo and his team grew a strain of Synechococcus in their lab and injected to the impaired heart tissue of a living rat. Then, they turned up the lights. After 20 minutes, they saw increased metabolism in damaged areas. Overall cardiac performance improved after about 45 minutes. The evidence suggested that the oxygen and sugar Synechococcus created through photosynthesis was enhancing tissue repair.

After injecting living bacteria into a body organ, you might expect an infection. But interestingly, the researchers didn’t find any immune response after TK HOURS “The bugs are just not there anymore, it disappears,” says Dr. Woo. “And maybe that’s the best kind of bacteria”—a friendly helper that sticks around to do damage control, then disappears without a trace. The recent study is merely proof-of-concept, but scientists are now on the path to trying the technique in human subjects. Next they’ll try it in larger animal models that are closer to humans, and they’re working on ways to deliver and shine light on cyanobacteria without an open heart surgery. They’re even considering genetically editing Synechococcus to make the critters release more sugar.