Wisconsin bad model for the nation when it comes to affordable health care!!!

How true is this grand Wisconsin myth pushed by Republicans?


"Our competitive marketplace is really a model for the nation..." said Sen. Alberta Darling, R-River Hills, co-chair of the budget committee.

Well, if this is "competitive," and a model for the nation ballyhooing the free market...no thanks:

It should also be noted that the state hasn't turned down one premium increase for the ACA exchanges, the opposite of most states like Minnesota and California:

Claims data for three of the country's largest health insurers, including two of the largest in southeastern Wisconsin, rank the state as having the second-highest medical prices in the country, behind only Alaska. A study by the Health Care Cost Institute, found that prices for 235 common medical services grouped as "care bundles," ranging from basic tests to back surgery, were on average 81% higher in Wisconsin than the national average.

The Government Accountability Office last year that found that Milwaukee and Madison were among the seven most expensive metropolitan areas in the country for three common procedures. At the same time, there is no correlation between price and quality in health care, according to a study by the Institutes of Medicine

All Payer System the Answer: A national plan works in other countries because they have set prices for health services, or what is called an "all payer" system. That's why the free market is the last thing we need:


If nothing else, the wide variation in prices strongly suggests a market that isn't working like other markets.

Government health programs, such as Medicare and Medicaid, set the prices they will pay. But the U.S. health care system relies on the market to set prices paid by commercial health plans. It is a market in which the cost is largely hidden from the consumer — the patient — because medical bills are paid by health insurers and employers. (Democurmudgeon correction: medical treatment is not a consumer product)

Economists contend that people who get health insurance through an employer ultimately pay the cost in the form of lower wages ... "Health care spending is driving out spending on other things." 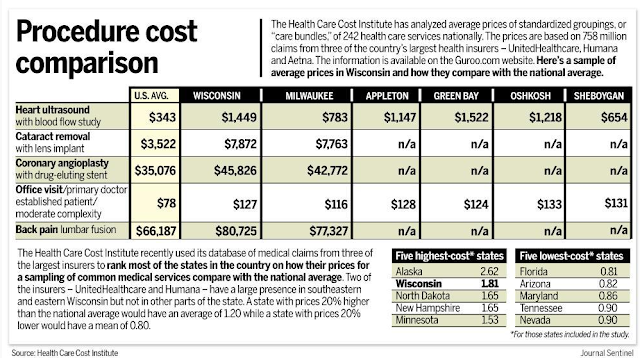