We're in real trouble: Trump voters loyal in the face of jobs losses in Waukesha, while attacking Paul Ryan!!!

This is almost like a surreal nightmare that just keeps playing out over and over.

In a blog I'm still working on, it's appears Americans on verge of losing their life saving health care are still on board with Trump. But that's not all.

These loyal voters have also decided to go down with the Trump ship in the face of losing their jobs: GE is moving from Waukesha to Canada...what is Trump doing about it?

GE CEO Jeff Immelt is a member of President Trump's manufacturing advisory council. Workers at the Waukesha plant, many of whom voted for Trump, are baffled that the president gave Immelt such a prominent role.

Bret Mattice is particularly surprised. He voted for the first time ever in 2016, casting his ballot for Trump because he felt Trump wasn't like the establishment Republicans and CEOs at all. "Trump's values were different than all of them," says Mattice, another long-time worker at the plant. He believes Trump cares about the "average person."

Mattice gives Trump a B+ grade so far.


GE first made the announcement that it was moving the factory to Canada on September 28, 2015. GE blames the job losses on Congress. In the summer of 2015, Congress shut down the Export-Import Bank. It's a government organization that provides money to help boost American exports."If Ex-Im had been reauthorized during that time, the decision to close Waukesha would not have been made," a GE spokesperson told CNNMoney.

At the end of 2015, Congress re-authorized the bank. But it hasn't been able to do any major deals above $10 million because the U.S. Senate hasn't confirmed enough people to serve on the bank's board. Trump used to favor shutting the bank down, but he recently did a U-turn.

Inaction, even for a few months, gave other countries the opening to go after GE:

Ryan says the bank had nothing to do with GE's choice to go to Canada. "GE's decision to upend the livelihoods of hundreds of Wisconsinites was deeply disappointing," Speaker Ryan's spokeswoman AshLee Strong, told CNNMoney. "The bank was reauthorized in (late) 2015, yet the plant is still closing."

Powerful nations that the U.S. competes against, including China and Germany, have something similar to the Ex-Im Bank. But many Republicans, including Ryan, slammed the bank as "corporate welfare." "Congress has failed to take action," a GE spokesperson told CNNMoney. "We are the only major economy on the planet without a fully functioning export credit agency." 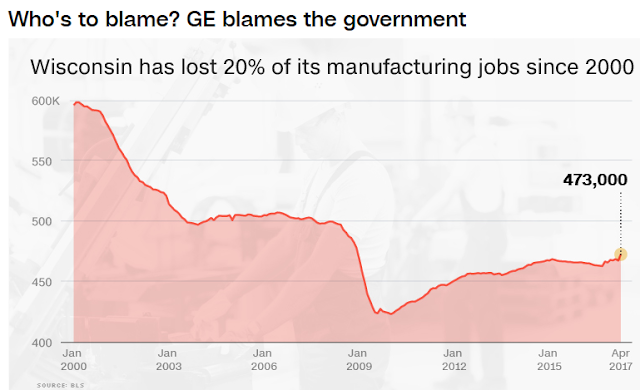