Rural Resentment is Real and a Republican creation that's destroying their schools.

It always broke my heart when I went through the little community of Navarino, just outside of Shawano. Driving past the now closed elementary school and its nicely laid out playground, I couldn't help but think how tough that might have been to local residence, who got together around school functions. It was one the best experiences I had with my kids.

You can thank short sighted tax cuts that are killing these small towns while forcing school closings and the missed opportunity of community growth and prosperity. Why can't states make sure small towns can compete equally with larger school districts?

Here's an EdWeek story about such a closing, and although many of the students are getting better grades at their new schools, the same effort could have been put into these smaller local districts: 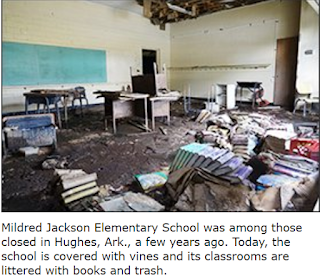 Like many school-age children in this rural town in the Arkansas Delta, Zion gets on a school bus around 6:30 a.m. for the ride to school (that) lasts nearly 60 minutes. Hughes elementary and secondary schools closed at the end of the 2014-15 school year, when the Arkansas education department mandated that the district consolidate with West Memphis because its average daily attendance had fallen below 350 students—a threshold set by a 2004 law known as Act 60.

Hughes' former schools are among the hundreds of schools nationwide that close for a variety of reasons. But research suggests that such closures sometimes have a disparate—and disruptive—effect on communities.


A national analysis of a decade of school-level data published earlier this year by the Urban Institute found that more schools actually closed in suburban areas. And when schools close in rural areas like Hughes, they are unlikely to be replaced, according to the Urban Institute's analysis.

The district was also the town's largest employer, leading some local businesses to take a hit after it closed, said Lincoln Barnett, a former member of the now-defunct Hughes school board. The bank, where the district kept its deposits, was slated to close last month, he said. Downtown is littered with empty storefronts and fading awnings and signs.

Shirley Hale, the program director at the Arkansas State University pre-K program: "This town is really poverty-stricken, but at least we had our schools," she said. "And they ended up taking that away from us. Instead of trying to support the smaller schools, they are trying to consolidate them. I don't think it's good for our children. I think it's politics. I don't have anything against West Memphis public schools," she said. "I just hate that our kids have to ride that bus over there."

Candace Williams, the executive director of the Rural Community Alliance, said that unless the state invests in rural communities—including providing reliable internet access and job opportunities—rural areas will continue to lose people, and more districts will be forced to consolidate.

Williams believes that annexation, where the local schools remain open even though another district takes over, may be a better alternative to consolidation ... cooperatives where districts share resources could help with the goals of providing rigorous course options, access to well-qualified teachers, and reduced costs.

Many white parents in Hughes and surrounding communities zoned for the district were already sending their children to private schools; others were using the state school choice law to attend neighboring districts ... On average, students across the state who were displaced by consolidation went to schools that performed better on state tests.

Gary Masner, the school board president in West Memphis, said, "It was the best thing that ever happened to those kids. Maybe the parents didn't particularly like it. Now they are here, and they are seeing the increased exposure they have to better facilities and better selection of courses and more extracurricular activities. The kids have thrived. ... I haven't heard anybody unhappy, except for a few administrators who lost their jobs."