Yet House and Senate Republican plans are getting trashed, not surprisingly, in this most recent poll:

So if Republicans can't prevent 23 million people from losing their health care insurance with a new plan, at least just dump the Affordable Care Act outright?

Dumb doesn't begin to describe taking this kind of chance with 8 percent of the economy. But get a load of what his in-the-tank true believing followers think: 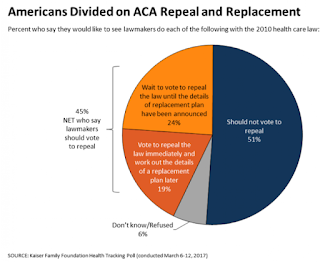 Of course Republicans are only doing what voters wanted them to do...see graph....

For me, an "all payer system" is simple; every doctor is your doctor, every hospital is your hospital. No bills, no worries ever. .

Waaayyyyyy too easy say Republicans, who want us to spend days, months and years maneuvering through their nightmarish and complicated idea of free market freedom. One idea is so ridiculously convoluted and costly that it numbs the mind, making people join a group formed to manage health policy...seriously?


KFFDotOrg: Association Health Plans for Small Groups and Self-Employed Individuals under the Better Care Reconciliation Act: The Senate Better Care Reconciliation Act (BCRA), a proposal to repeal and replace the Affordable Care Act (ACA), includes a provision to create new association health plan options for small employers and self-employed individuals ... the ACA requirement that premiums cannot vary based on health status does not apply in the large group market. Neither does the requirement for policies to cover ten categories of essential health benefits.

SBHPs would be able to set premiums for small firm and self-employed members based on health and risk status ... However, in the event a covered individual becomes seriously ill or injured, nothing under federal law would prevent the SBHP insurer from raising the premium for that small employer or self-employed individual, even to unaffordable levels. This could lead to premiums in the traditional small group market becoming much higher for employers who need to seek coverage there ... making health insurance less affordable for sick individuals and small groups who would have to rely on them, and potentially not available at all.