Guns aren't like knives or cars. The fact that we even have to make that distinction should tell you how far down the rabbit hole we've gone over concealed carry in Wisconsin. So it shouldn't be to much of a surprise that Republicans here are now pushing the right to carry a gun without a background check and training: 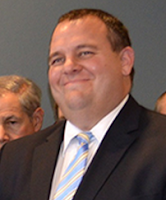 Republican State Sen. David Craig introduced legislation this week that would allow Wisconsinites to carry concealed firearms without training or a permit ... Giving citizens access to those constitutional rights has panned out well in the past, he said.

"Without ill effect?" Overall, the GOP backed culture of guns has had a profound effect in Wisconsin. If only the dead could throw their two cents in now:

Even worse, Republicans seem more concerned about protecting supposed responsible gun owners with new laws that give them a pass for being reckless, like carrying a gun on school grounds.

A new report on mass shootings says it all. Everytown for Gun Safety inventoried all mass shootings between 2009 and 2016. The black bar represent child deaths, the green represents total deaths per year 2009-2016: 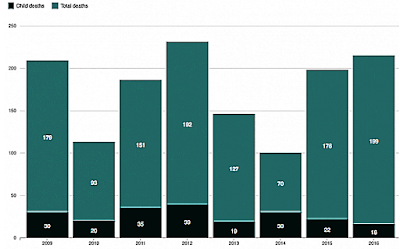 The majority of mass shootings——were related to domestic or family violence.

About 4.5 million American women report that they have had an intimate partner threaten them with a gun. (4) And guns make it more likely that domestic abuse will turn fatal—when a gun is present in a domestic violence situation, the likelihood that a woman will be shot and killed increases fivefold. (5)

But for Sen. Craig, the fate of threatened women and children...is sealed:

The bill makes it easier for law-abiding citizens to protect themselves, he said, and those intent on using guns for illegal purposes will do so anyway.


“And at the end of the day, people who are hell-bent on conducting violence with a firearm are going to do that,” Craig said.

Additionally, there is not a single mass shooting in Everytown’s database in which the shooter was stopped by an armed civilian—even in cases where there were armed civilians present.

Wisconsin now has a well deserved reputation for its crackpot legislators. Like Rep. Bob Gannon, who recently wanted to pass a law penalizing businesses with "gun free zones" for their customers. That's a very bad idea, according to the new research:

Only ten percent of incidents took place in “gun-free zones”, or areas where civilians are prohibited from carrying firearms and there is not a regular armed law enforcement presence (armed security guards, for example). The vast majority of incidents—63 percent—took place entirely in private homes.

Instead, Gannon's use of "Republican logic" flipped reality on its head:


WSJ: Gannon’s proposal, dubbed the “Disarmed Citizen Compensation Act,” would go a step further in discouraging gun-free zones by allowing a victim of gun violence to sue businesses with such bans and recover triple the amount of damages without regard to who was at fault. 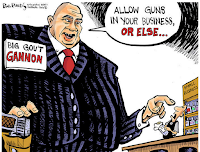 Gannon: "Just so you know, my state business, my other job is selling property and liability insurance. Wisconsin does not have a death penalty law, but with significant practice and careful aim, law-abiding citizens can help clean our society of these scumbags ... If you’re going to allow somebody to come in and put a bullet in my brain, you should have some liability ... If one in twenty at that mall had the ability to drop the creep, it would sure bring it to a close in a hurry. I refer to that as self defense. If it happens to terminate the bad guy, too bad, so sad-dy."

"The reason I put this out today is because we're getting all this baloney with the Democrats singing along again. You see Democrats think they can deal with this violence by having sing-a-longs, and having big food buffets in the House of Representatives in Washington D.C....they do that in Milwaukee too you know, they march around, they sing, and then they stop and have lunch and they think that's dealing with violence...instead of babbling about it on the radio, or in your marching circles, in your sing-a-long at the state Capitol..."

And for those "fiscal conservatives," well, that's a laugh?


The University of Chicago Crime Lab has issued a new report, “Gun Violence Among School-Age Youth in Chicago." [1] The Chicago Tribune, March 3, 20009, reports:

Expanding upon previous research that every crime-related gunshot wound causes around $1 million in social costs, the report's four authors calculated the annual cost of gun violence at $2.5 billion, or $2,500 per Chicago household.” $2.5 billion dollars just for Chicago. Imagine how much gun violence is costing our entire country.