Scott Walker's Bumbling Economy and Slow Job Growth, and he had the nerve to criticize Obama?

I once wrote: "Scott Walker is stuck in the past, working on a manufacturing renaissance in Wisconsin. In fact, Walker is attacking, vilifying and stopping emerging industries he feels aren't part of the Republican Party platform, like wind, solar and mass transit."

Well, now we're feeling it, which is just in time to give Walker four more years? Seriously? Walker was so sure about his vision of a manufacturing-mecca-in-the-Midwest, that he put all of his eggs in one tax cut basket:

Failed!!! So what did the manufacturers tax cut give back to Wisconsin? 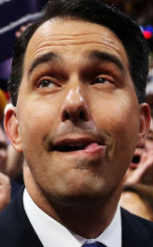 Wisconsin added just 11,590 private sector jobs in 2016, good for a growth rate of 0.5 percent. Those numbers mark the slowest job growth of any year since Gov. Scott Walker took office.

Contributing to the slower growth in 2016 was a decline in manufacturing jobs. Wisconsin suffered a loss of 3,776 jobs in the state's second-largest industry.

Tim Smeeding, an economist at UW-Madison who noted 2016's flat job growth in the Wisconsin Poverty Report released earlier this week, said, "Manufacturing employment has been dropping in this country for 40 years. Other jobs in other industries - there aren't enough startups - there's not enough going on."

Walker's laser like focus on manufacturing, encouraged by the lobbyist at Wisconsin Manufacturing and Commerce, owns this collapsing job market. In the report below by WKOW's Greg Neumann, Walker offered up this distraction:


"Our biggest challenge isn't creating jobs, it's finding people to fill them," wrote Tom Evenson in a statement. "Wisconsin’s unemployment rate is 3.2%, the best it’s been since 2000 ... We’ve seen a strong ramp up in private sector job growth so far in 2017."

As anyone knows, since time began, there has always be a lot of jobs that go unfilled. So to focus on the impossible task of filling those jobs, instead of creating new jobs in emerging industries, you get the lowest job growth numbers in Walker's six years, .05!!!

And this didn't help either; out migration of labor: 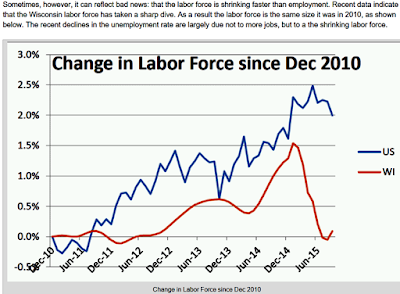 Walker has ignored the biggest engine of job creation, small and medium businesses under 500 employees. And in today's economy, that means venture capital for startups, many of which are in the tech industry. WKOW's Greg Nuemann explained:

Here's an even more in-depth look (4:30 min.) at the need for venture capital in Wisconsin:

Gig Economy...does Scott Walker even know what it is? He should as governor. Yahoo Finance talked about it in the video clip below, and Techtarget defined it below that:

A gig economy is an environment in which temporary positions are common and organizations contract with independent workers for short-term engagements.

A study by Intuit predicted that by 2020, 40 percent of American workers would be independent contractors ... this digital age, the workforce is increasingly mobile and work can increasingly be done from anywhere, so that job and location are decoupled. That means that freelancers can select among temporary jobs and projects around the world, while employers can select the best individuals for specific projects from a larger pool than that available in any given area ... financial pressures on businesses leading to further staff reductions and the entrance of the Milennial generation into the workforce ... businesses save resources in terms of benefits, office space and training. They also have the ability to contract with experts for specific projects who might be too high-priced to maintain on staff.


Taken together, steps to eliminate trade deficits (by ending currency manipulation and unfair trade) and rebuild U.S. infrastructure could easily generate sufficient demand for manufactured products to return most or all of the 5 million manufacturing jobs lost between 2000 and 2014. Growing trade deficits and the shortfall in demand caused by the Great Recession, and not productivity growth, are the major causes of manufacturing job loss in this period.

Manufacturing and Coal Renaissance??? It almost seems like Walker is longing for the days of big manufacturing plants pumping out billowing clouds of pollution from their towering smoke stacks. Take Walker lap dog AG Brad Schimel's editorial defending the dying coal industry as a way to save manufacturing...well, it pretty much says it all:

As one of the top manufacturing states in the country, Wisconsin has much to lose if the Obama administration succeeds in its plan to destroy the viability of clean-coal electric generation. Manufacturing jobs in our state depends on affordable and reliable electric power.