Michael Phillips: "Yes, I'm Scared, scared at what could happen to me if Medicaid cut comes to pass."

If you want to know what we've become as a nation under Trump and the "leadership" of Paul Ryan, what you'll see below will set the record straight. If 33 year old Michael Phillips and his mother's bullet proof arguments don't inspire you to strongly act on his and everyone else's behalf, then I don't know what will. It's 13 minutes (edited to include additional story highlights) you won't forget:


Michael Phillips, who has spinal muscular atrophy and whose life literally depends on Medicaid, shares his fears about what Medicaid cuts could mean for his care. Watch the remarkable full interview with Ari Melber on MSNBC:


"It's amazing after all these years I would have to fight to spend less money!"


Michael Phillips: "Ever since, November the 9th, 2016, I haven't been sleeping well. I've been scared. I've never been scared by the results of an election. It's an odd feeling. I always felt like the federal government exists to protect citizens, even when state governments won't do so, maybe especially when state governments won't do so...so yes I'm scared, scared at what could happen to me if Medicaid cut comes to pass.

I'm a published writer, I helped develop assistive technology, I'm not exactly Ryan Gosling, but I lead a good life. Losing Medicaid, being forced into an institution, I'd lose everything. I'd lose the rights guaranteed to me under the Constitution, "life, liberty, and the pursuit of happiness." People with disabilities know happiness isn't guaranteed, but we want a shot at it just like everybody else."

The amazing Michael Phillips took to twitter...and here are a few of his tweets that really stood our for me: 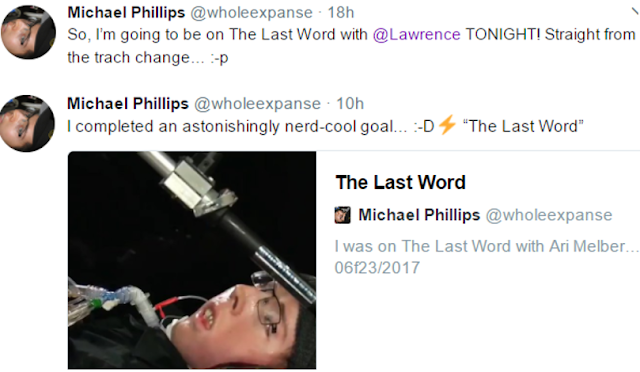 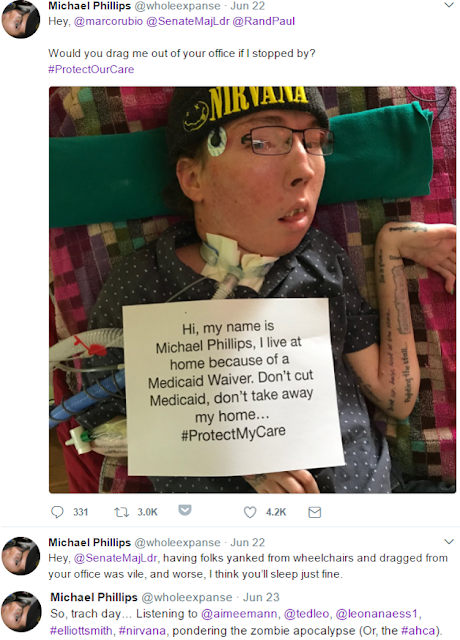 What kind of country have we become? Thankfully Trump in-the-bag-supporters, who admire how he speaks his mind because it now gives them license to do the same thing without a conscience, laid it out very clearly below: 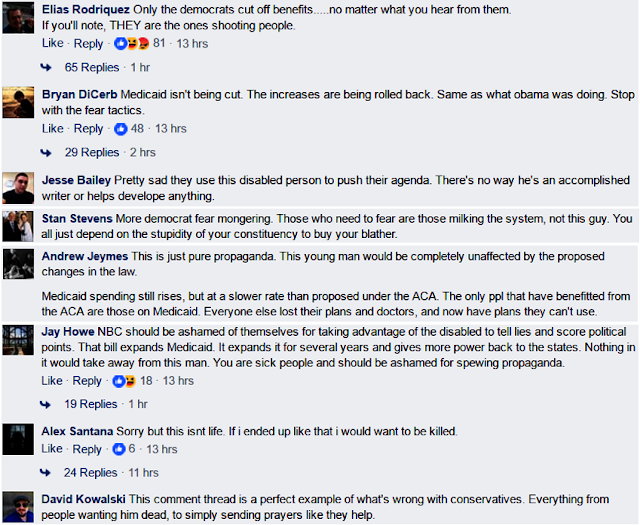