As I mentioned in a previous post, it will be interesting to see how long the GOP will take exploiting
the baseball shooting as extremist liberal politics, as opposed to the radical right wing rhetoric of "Second Amendment remedies" that threatened an armed revolution against their government and Democratic candidates for office. Or the lack of empathy to the Sandy Hook shooting they quickly blamed on mental health and moved on. 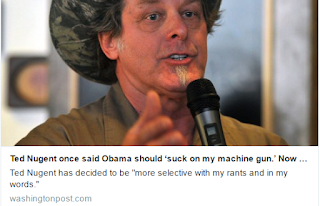 God knows Conservatives aren't at Fault: My conservative friend in Milwaukee is following closely the shooters relationship to Rachel Maddow's show, hoping this might bring down MSNBC. He said, "The Media is to blame for this." His source?

Well, in another believe it or not moment:


Breitbart: "Maddow referenced a Hodgkinson letter to the editor that appeared in the July 29, 2012 edition of the Belleview (IL) News-Democrat, but denied having received correspondence Hodgkinson. During the re-air of her program at 12 a.m. ET, the segment did not air."

It was this Belleville News-Democrat article that nailed Maddow:


James Hodgkinson said: "One of my favorite TV shows is “The Rachel Maddow Show” on MSNBC. On a recent show she stated that 17 very rich men are supplying the Republican Party with more than 60 percent of their campaign contributions. These men are trying to buy our country.

See, Maddow's hate speech needs to be stopped now. Who knows, the rich may be the next target of another liberal madman.

Shifting Blame Game: What's most frustrating is the effort gun toting right wingers put into avoiding responsibility. Like they did awhile back....

No matter what happens, there's always something gun drooling conservatives can dredge up that makes everything justifiable. If you bring up Sarah Palin's part in encouraging the violence that resulted Gabby Giffords getting shot, Republicans will find a dozen Democratic comments that use the words "target," "bulls eye," or "take aim at." They would even pluck the picture below right from Ireland: