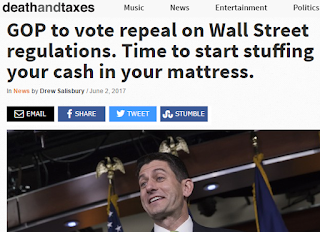 “This is a jobs bill for Main Street. It will rein in the overreach of Dodd-Frank that has allowed the big banks to get bigger while small businesses have been unable to get the loans they need to succeed. With the Financial CHOICE Act, the era of taxpayer-funded bailouts and too big to fail is over. Instead, we will put Main Street first to create more opportunities for people who work hard and do the right thing.

"People who work hard and do the right thing" probably isn't mention anywhere in the Act:


Ryan’s co-opting of the “too big to fail” tagline was rich, considering that Dodd-Frank was specifically designed to ensure financial institutions so entwined with the economy that their failure might tank the entire market could be dismantled safely. It’s right there on the first page of the legislation:

So what's making Ryan drool in the Financial CHOICE Act? Well, it has nothing to do with helping you. In fact, you're on your own...which is CHOICE and freedom after all:


The Consumer Finance Protection Bureau — which seeks to improve transparency in auto loans, student loans, and mortgages, i.e. the things most directly affecting the average Joe — would be hobbled. Right now the CFPB can sue financial institutions on your behalf when they cheat you out of money, and track and resolve customer disputes with their banks and credit card companies. It acts largely independently because its director cannot be fired by the president and it does not have to answer to Congress. In other words, the only person the CFPB works for is you, and the GOP doesn’t like that, so they want to replace its director with a board of appointees and eliminate its current funding.

Another provision the GOP hopes to do away with, which was not a part of Dodd-Frank but an Obama-era executive order, is the fiduciary rule. We’ve addressed it in greater depth in other articles, but put simply, the rule required financial planners to act with your best interests in mind, instead of acting in their wallet’s best interests. (Kind of wild they were ever allowed to do that in the first place, isn’t it? But hey, this is America.)

And I thought these were two nightmarish but interesting additions:


The bill would remove the power through which the federal government can label a bank “too big to fail,” and disassemble it before it collapses and triggers another crisis. The bill would also replace Dodd-Frank’s Orderly Liquidation Authority with a special bankruptcy process that aims to insulate the financial markets from a failing bank’s fallout.