What "Choice" and "Competition" do we get with TrumpCare Disaster?

I took a day off after watching the Trump administration media blitz on the Sunday "news" shows dishing nothing but hyperbolic bullshit. Come on, cutting $880 billion from Medicaid isn't a cut...my god the balls!

In fact, I just found this Morning Joe clip that backs up my claim, and that it wasn't just me who noticed the bold face lying:

While the press continues to ease up on Trump and the Republicans over a health care plan that CBO initially said will drop insurance for 24 million Americans, I have a question about "choice" and "competition" on their "free market" TrumpCare model. 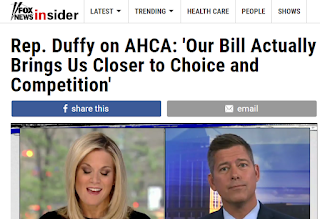 1. What "choice" do I have with a prepackaged insurance policy that is basically a take-it-or-leave-it proposition? Having "shopped" for insurance in the individual market for over 20 years, plans don't vary much from one insurer to the next. The only competition would be between insurers, and that hasn't worked for decades. NOTE: The big regional hospitals are the ones in control of costs, and they set the prices. Good luck with lowering costs.

2. Even worse, the magical unicorn in the room is never addressed; how do we get "competition" when we're locked into dominant area insurer plans dictating coverage limits, costs, doctors, hospitals and networks? What about those fly by night out-of-state insurers? Think about how dumb and expensive that would be to set up regional offices and oversee billing, patients and providers with no real negotiating ability.
Posted by John Peterson, Democurmudgeon at 5/08/2017 03:17:00 PM