Scott Walker would take the State Waiver for Health Care, Jacking Everyone's Rate through the Roof.

Paul Ryan was an incredibly happy guy when he found a way to take health care away from Americans just so insurers could make a hefty profit. His plan passed the House.

This supposed free market plan simply allows people to "shop" for insurance, not health care. Once you have the insurance, the "free market" part of their plan disappears, putting the insurer in charge of what you get covered and won't; how much it'll cost you; what doctors you can see; and what hospitals are in your network. Ah, freedom.

Sure we're waiting for the new CBO assessment of the approved plan next week, but the basic plan that angered so many Americans remains. The waivers are also listed below, along with price increases. Another surprise, it turns out health care reform was just an excuse to cut taxes...

1. The legislation will result in 24 million people losing their health insurance by 2026.

2. Ends the tax penalty against people without coverage.

4. Changes Medicaid from an open-ended program to one that gives states fixed amounts of money per person.

5. Replaces the ACA's cost sharing subsidies based mostly on consumers' incomes and premium costs with tax credits that grow with age.

7. Consumers who let their coverage lapse for more than 63 days in a year would be charged 30% surcharges to regain insurance. This would include people with pre-existing medical conditions.

Gov. Scott Walker has already come out in favor of getting a state waiver. Hold onto your wallets folks, freedom and liberty will empty your pockets:

"That's something we would certainly consider. We had a very effective program before."

How effective? Keep in mind, high risk pools are funded by you and me, taxpayer dollars:

Wisconsin's high-risk pool insured about 21,000 people, with critics saying high prices kept tens or hundreds of thousands of others from accessing it. Those applying for the program had to wait six months before they were allowed into it and a lifetime cap of $2 million. Health Insurance Risk Sharing Plan lost $6.9 million in 2011, roughly a third of which was offset by a federal grant, according to the Wisconsin Legislative Fiscal Bureau. The same year, programs in the 35 states lost a total of at least $272 million.

1. State waivers would allow insurers to charge older customers higher premiums by as much as they'd like.

2. States get $8 billion over five years to finance high-risk pools that cover those with pre-existing conditions.

3. States get $130 billion over a decade to help people afford coverage.

4. Keeps ACA provision that children can remain on their parents' insurance plans until age 26.

I've got a post coming up that explains the passage of this draconian plan; keeping their promise, no matter what was in the bill. Bizarre, yes, but true.

Unfortunately, keeping that promise was a double edged sword for Trump: 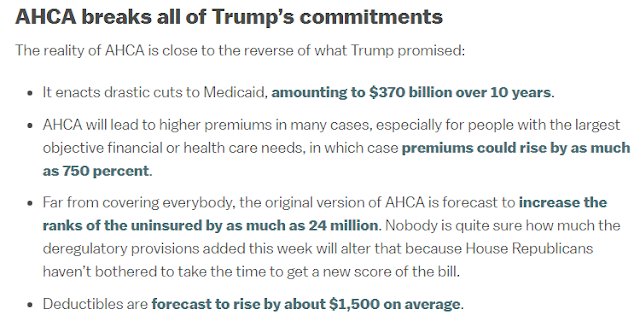 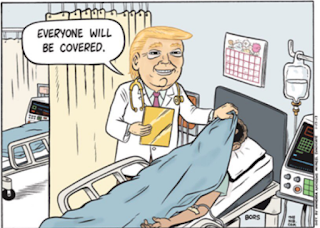