Trump Budget: "The wealthy don’t have enough and the poor have too much, and they’re going to fix that.”

Trump voters thought that a big talking New York millionaire and BS'er offered them the kind of hope no Democrat could offer...suckers. Your WTF moment f**ked us all!

The politics of resentment is barreling down the tracks with the hopes of boosting the economy, save taxpayer dollars, and finally give the rich that long awaited opportunity to use their tax savings to add costly labor to their payrolls. Makes perfect sense, despite a lack of consumer demand.

What a classic "supply side" moment.

The hard political work of helping identify and grow future industries, provide higher wages, offer free education and job training...eh, it's just another word for big government. The easiest solution is to just throw people off our safety net programs, like low wage part-timers and disabled Americans on Social Security:

Reduce or eliminate trillions of dollars in taxes that are paid primarily by the wealthy, including the estate tax and the marginal rate on ordinary income paid by the richest taxpayers.

He would lessen spending on Medicaid by $1.4 trillion over a decade, and he would allow states to impose strict limits on other major anti-poverty benefits such as food stamps. repealing President Obama’s health-care reform, which helped cover poor and middle-class households with funds raised in part through greater taxes on the rich.


“If you are a 30-year-old adult, you have never had a job in a healthy American economy. You’ve either been in a recession or sluggish recovery, and you think this is normal and we are here to tell you it is not.”

Oh but it its normal, every time we have a Republican president or House and Senate majority. 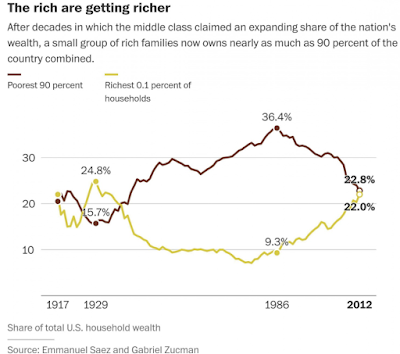 Gabriel Zucman, an economist at the University of California at Berkeley, attributed the increase in inequality in part to President Reagan’s reductions in marginal rates paid by the rich. Zucman said that those reductions had failed to yield improving standards of living for Americans of middling incomes. “The U.S. has run a big experiment,” Zucman said. “It has failed in the most spectacular way.”

Zucman described Trump’s plans as an extension of Reagan’s approach. “If we double down on these past policies, inequality could really reach extreme and totally unprecedented levels in the years ahead,” Zucman said.