It’s now overwhelmingly clear that Republicans in North Carolina illegally made it harder for African Americans to vote and diminished the power of their votes. Today’s decision could have far-reaching ramifications for striking down gerrymandering nationwide.

In a 5-3 opinion today, Justice Kagan (surprisingly joined by Justice Thomas) ruled that North Carolina artificially increased the number of black voters in the state’s 1st and 12th congressional districts.

Didn't get the News? Of course, that didn't stop Scott Walker's grossly unqualified AG lapdog Brad Schimel from ignoring the courts decision today as if it never happened, and made this mind numbing request on the same day:


Wisconsin Attorney General Brad Schimel filed a brief today asking the Supreme Court to stay an order to redraw Wisconsin's legislative district boundaries ... saying it's likely the court will preserve the current districts and redrawing them would waste resources.

Really? After the majority decision today?

Wisconsin Voter Suppression a Killer: The Brookings Institute posted a story with a graphic a few days ago, that will blow your mind.

Newly released Census Bureau data confirm that both minority and black voter turnout took a decided downturn in last November’s elections ... Minority and black turnout was not only lower in the national statistics but also in key swing states.

Check out a few of the changes in the other swing states...not good right? 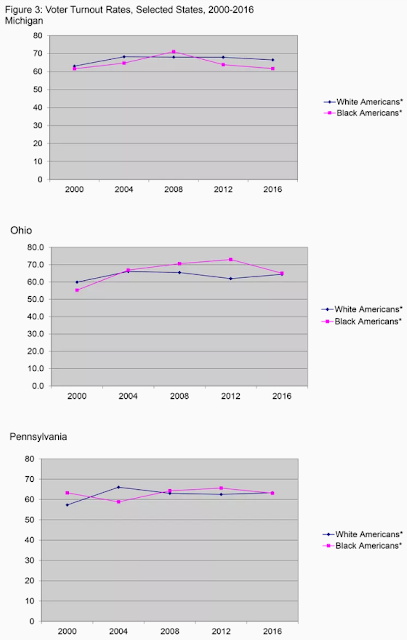 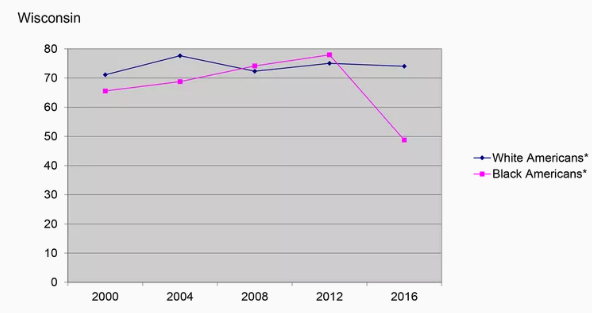 This is beyond the Obama effect that didn't seem to produce this wild swing in the other states. What was that you were saying Brad Schimel?
Posted by John Peterson, Democurmudgeon at 5/22/2017 06:47:00 PM