Exploiting the Politics of Resentment with Zombie TrumpCare.

You've got to wonder what a "family value" is after recent resentful comments by Republicans about health care.

I never really thought about it in terms of "family values," it wasn't a "thing" to me. It was just something I chose to define for myself. For our rugged conservative individualists, the term "family value" is a clearly defined one-size-fits-all standard that must be forcefully maintained through tough-love regulations.

As a life long Wisconsinites, family values came naturally to me; The more I traveled the state, the more I wanted to stay in Wisconsin; I bought a house in a terrific city with a great school system. That added monetary value to my home; I love having four seasons, but that wreaks havoc on our now crumbling infrastructure, which not surprisingly means we have to pay higher taxes to maintain; and when it comes to health care, BadgerCare's once broad income base gave more lower income residents access, something even Republicans brag about now despite making it harder to get.

You can toss the previous paragraph into the trash can, thanks to our "family values" Republican Party:


Rep. Robert Pittenger (R-NC) told reporters Tuesday morning when asked if people with pre-existing conditions could be charged much more under the American Health Care Act, “People can go to the state that they want to live in. States have all kinds of different policies and there are disparities among states for many things: driving restrictions, alcohol, whatever. We’re putting choices back in the hands of the states.”

See, home and family values are disposable now. If you don't like what Republicans are telling us to do, we should just leave our home state and everything we value. Real "family values," real small government like.

Rep. Mo Brooks (below) and Robert Pittenger aren't the only Republicans who thinks like this. This is clearly something Republicans talk about a lot behind closed doors, letting it slip every once and while in public.

Republicans are still Grossly Exploiting the Politics of Resentment: Why should healthy people have to pay for sick people? You have to be some kind of sicko to think like that, but many people do now, thanks to the GOP's continued drumbeat of the politics of resentment.

Republican Rep. Mo Brooks is a member of the draconian tea party caucus. Nothing says the politics of resentment like his recent statement against the sick:

“It will allow insurance companies to require people who have higher health care costs to contribute more to the insurance pool that helps offset all these costs, thereby reducing the cost to those people who lead good lives, they’re healthy, they’ve done the things to keep their bodies healthy. And right now, those are the people who have done things the right way that are seeing their costs skyrocketing.”


Speaking of people who "lead good lives," who are also driving up health care costs for everybody... 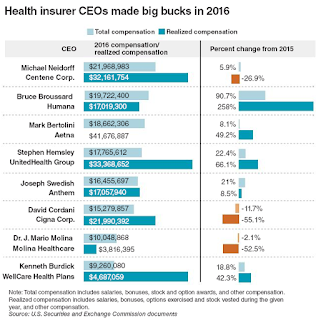 Valeant, CEO Joseph Papa and CFO Paul Herendeen, are healthcare's top-paid executives in 2016 at $62.7 million and $31.4 million, respectively ... UnitedHealth Group CEO Stephen Hemsley made $17.8 million in total compensation in 2016 for running the nation's largest health insurance company. Aetna CEO Mark Bertolini made $18.7 million in total compensation in 2016, up from $17.3 million the year before.

NY Magazine's Jonathan Chait summed it up this way:


The conservative health-care analyst Jeffrey H. Anderson scoffed, “Having people pay their own way is apparently an injustice akin to segregating them by race or creed.”

Of course, you can’t pay your own way if you’re too poor or sick to afford your own projected medical costs. Indeed, sometimes people who are healthy at the moment find one day they are not, or they have a sick child, or maybe they simply want to have a baby. (The cost of bearing children is another one Republicans want to be borne entirely by those doing it.) The Republican plan expresses one of the core beliefs shared by movement conservatives, and utterly alien to people across the globe, right and left: that people who can’t afford the cost of their own medical care have nobody to blame but themselves.

Labels: Politics of Resentment, Trumpcare
Email ThisBlogThis!Share to TwitterShare to FacebookShare to Pinterest