Health Care: the Bad, the Ugly, the Good.

I recently tweeted a link to the list below of health care services we would lose if the GOP TrumpCare plan passed into law, with the state waiver plan in place.

One of the biggest problems the ACA had was getting people insured through their employer a working understanding of the individual market plans. Employees had no idea how dysfunctional our system was since they never had to "shop" for insurance, so it was easy to hate and oppose ObamaCare. And Republicans knew that, exploited that, and turned public opinion against it.

But as the public paid more attention to the details exposed by town hall video clips, the CBO analysis, and Paul Ryan's first failed attempt to get something passed, support for the ACA finally took off, and surprise, Republicans were stuck with an old repeal and replace plan nobody wanted. Oops.


An inconvenient truth uncovered by the Wall Street Journal exposes that the bill would allow individual states to opt out of the ACA minimum benefit standards. Employers could just reduce covered benefits they offer by hunting the most bare bones standards offered by the most regressive state, limiting, for example, existing ACA requirements that cap out of pocket expenses.

Republican voters and twitter trolls don't seem to care one way or another about any of this, including the list below, but they will once their wallets empty and their stuck planning bake sales or car washes to fund a life saving medical procedural for their family member: 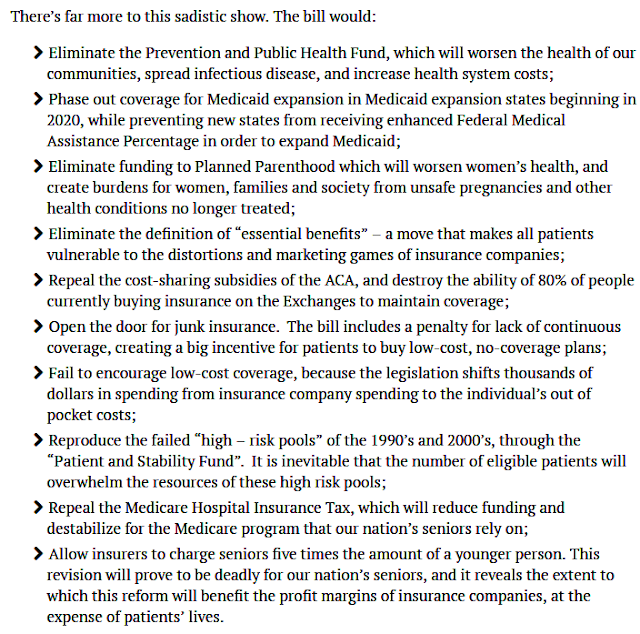 There is nothing "free market" about the RyanCare plan. Sure you can shop for insurance, but once you buy it, well, you're stuck with insurance bureaucrats, red tape, narrow networks, limits to coverage, copays, and sky high deductibles.

Republican Health Savings Accounts to the Rescue? This is voodoo health care magic for the true believers. It's a rip off and complete nonsense. Twenty years ago I bought into their voodoo HSA plan just to see what would happen, and here's what I got...and what you're going to see in the future:

1. 20% to 30% premium increases every year. This happened with each of the two companies I had policies with.

2. Through the roof deductibles. My last deductible was $10,500 in 2006, a supposed bargain because the higher deductible lower my monthly premium increase by a few dollars. Lucky me.

3. The tax deduction for a Health Savings Account only covered half of my yearly deductible. That was no bargain.

4. The myth of actually having money in your Health Savings Account. I gambled and had almost nothing in mine, because I couldn't afford to park money away like that. That's the dirty little secret about the HSA's. No one will fund their accounts.

5. "Freedom and Liberty" isn't offered by insurers. I tried to remove my $700 a year prescription drug option for a year or two because I didn't need it, but was told I could never add it back onto the policy if I removed it, ever.

6. Bills from doctors who strolled through my operating room, who weren't part of the insurer network, happened regularly. That was huge, like having a second deductible.

It's back to the old health care nightmares, made worse by invasive drug tests, work requirement and benefit limits.

See if California's plan fits what you would like from health care, and your government: "The Healthy California Act proposal meets the common-sense standard that the American people are demanding:"


1. Every Californian eligible to enroll, regardless of age, income, employment, or other status

2. No out-of-pocket costs, such as high deductibles and co-pays, for covered health services.

5. Long-term care services provided under Medi-Cal continue, and will be expanded with an emphasis on community and in-home care.

7. No insurance claims denials based on corporate-profit goals.

8. Funding through a consolidation of resources currently spent on health coverage, including federal payments for Medicare and Medicaid, major savings from elimination of insurance waste, other bureaucracy, and profits with coordinated planning on health resources, and added revenues through a progressive tax (program).