Walker controlled by Money Corrupting Wisconsin Special Interests...not those other guys in Washington!

Scott Walker (money corrupts) may have duped his followers for the last time! Remember this election cinching quote (with correction by me): 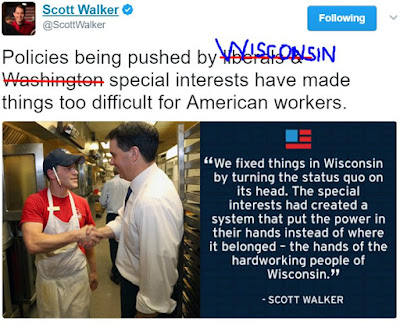 It's what Walker left out; Wisconsin special interests (money corrupts), where Walker "put the power in their hands."

Those "hard working people" mentioned in Walker's (money corrupts) speeches? They're not you...

The deep-pocketed Bradley Foundation takes its Wisconsin template for conservative control of government across the nation...

Under the Wisconsin model, Bradley-funded groups recruit conservative candidates, propose and defend conservative policy, dig up dirt on liberals, draft conservative legislation and provide legal support throughout the process. These 14 groups, dubbed the "Wisconsin Network," received more than $13 million from Bradley from 2011 to 2015.

In a statement you can only describe as a jaw dropping show of arrogance, an amazing comfort level with big monied special interests (money corrupts), and a total disconnect from the will of the people, Walker said Wisconsin's power brokers should be praised (money corrupts)...:

Walker said it saved taxpayer dollars to have the Bradley Foundation pay for the panel, even if it was never announced.


"People bring in speakers on given topics, so instead of the state taxpayers having to pay to bring them in, other organizations are willing to do that. I think that’s legitimate."

And because life already doesn't suck enough for the poor, why not add to their difficulties under the manipulative (money corrupts) ploy of "right wing resentment:"


Along with being a Walker cabinet member, Anderson — who once said welfare had "outlived its usefulness" — is the head of the Secretaries Innovation Group, which has been awarded $1.5 million by the Bradley Foundation's board.

Anderson's group, made up of 20 human services secretaries from states with GOP governors, wants to return welfare decisions to the states and to cut the number of people on welfare, food stamps and Social Security Disability Insurance. It also wants to revise the earned income tax credit, with one option being to make it a subsidy for employers, not a payment to families.

Just to be clear, Walker put the (money corrupts) power, and his agenda, in the hands of these people:


Four months after Walker survived a 2012 recall election, Grebe held the foundation's annual donor retreat at the American Club in Kohler. Part of the cost of the event was underwritten by Beloit billionaire Diane Hendricks, whose holding company gave the foundation $40,000, the internal records show.

In all, about 85 major Wisconsin donors showed up for the Kohler conference, held Oct. 7 and 8. Of that number, 76 — or nearly 90% — have given a total of $2.1 million directly to Walker's campaign since he first ran for governor.