Wisconsin comes in at number 10, based on the whimsical impressions of CEO's, based on nothing, no facts, statistics, research...just knowledge of those hyperbolic pronouncements in the media by Scott Walker. Yea, four more years of that.


Wisconsin in top 10 of Chief Executive magazine’s best states for business; Ranking based on CEO survey.

Job creation lags of course, and Walker's 250,000 jobs promise in 2010 still hasn't panned out. But big business giveaways that allow them to pay nothing in to support our state...sweet:


Walker and the Republican-controlled state legislature instituted $2 billion in tax relief, including tax credits that virtually eliminated the tax burden on manufacturers and agricultural producers.

Yet in the wake of the policy changes, Wisconsin still didn’t generate new jobs as quickly as Walker had hoped. Job creation got off to a sluggish start, and even today the state remains nearly 65,000 new jobs short of the 250,000 that Walker promised to create by 2015.

But these CEO "raves" fall flat:

Right to work was mentioned as one of the most important factors. If you believe Republicans, CEO's are dying to raise worker pay based on "right-to-work."

But here's what a few C.E.O.'s said during the judging:


"Wisconsin is improving due to state leadership, still has a way to go. Workforce is limited due to aging population not replaced well by births and tendency for college kids to leave after college…but many return."

"Walker, controversies, cronies, and policies are killing opportunities in the state."

"Both Ohio and Wisconsin are becoming more business-friendly and are willing to help businesses get established while supporting critical worker training."

"Wisconsin still has high taxes but under Gov. Walker it is getting much better."

Let's Cut through the Crap: Chief Executive Magazine ripped California, and rated it at the bottom of best states for business. Really? Chief Executive isn't the only one deceptively pushing pure right wing politics as "good business." 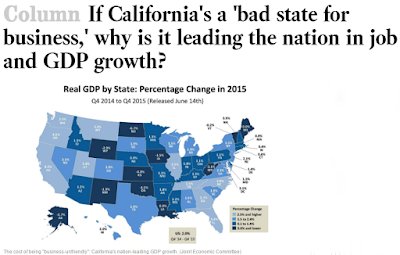 LA Times, Michael Hiltzik:  In his “Rich States, Poor States” ranking for the conservative, pro-business American Legislative Exchange Council, or ALEC, conservative economist Arthur Laffer places California at a dismal 46th in economic outlook for 2016. How can these figures be reconciled?

The most obvious answer is that the business-friendliness and competitiveness rankings are pretty much baloney. They don’t actually examine what makes a state successful; instead, they merely judge its adherence to right-wing economic orthodoxy.

It shouldn’t take much thought to recognize that most of these variables, taken singly or even together, don’t have much to do with whether a state is friendly to business or with its economic outlook. Rather, they’re just conservative shibboleths: low taxes, hostility to labor, etc., etc.

California is marked down in such categories as “business friendliness,” a measure of litigation and regulation, in which it ranks 50th; the “cost of doing business” (taxes, wages, and the generosity of government incentives), on which it ranks 49th; and the cost of living.

Interestingly, the state with the second-best ranking on Laffer’s curve is North Carolina, which may be guilty of the worst self-inflicted wound in the country. That’s its enactment of legislation that discriminates against LGBT individuals. The measure could cost the state $5 billion in federal funds and business investment.

“That’s a metaphor for a different look at what business-friendly means,” Stephen Levy, head of the Palo Alto-based Center for Continuing Study of the California Economy comments. “Could it be that being a welcoming community is a big positive for business?”