"We have a Moron for a President!" Just another Trump Monday.

There is so much to get to today that proves over and over again that the nation...no, the world, is at the mercy of the dumbest most reckless president in history, Donald Trump. We can thank Democratic voters too, who just took a chance, wanted to see what would happen, and who had a problem with Clinton's possible conflicts of interest...unlike anything Trump is getting away with now.

Just today these loosely related stories all made me want to just turn of the TV, radio, computer and burn the newspaper. 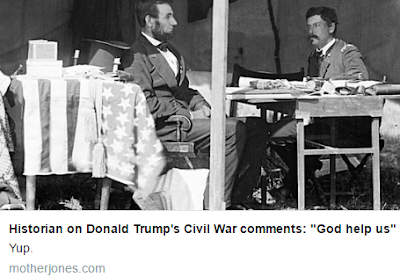 "People don't realize, you know, the Civil War...People don't ask that question. But why was there a Civil War? Why could that one not have been worked out?"

2. Or the massive press coverage over the revised Republican plan to let states opt out of covering preexisting conditions, a tip to the tea party Freedom Caucus, wasn't something Trump was aware of. Even my favorite author and conservative Norm Ornstein was uncharacteristically fed up:

3. Or Trump's war with the constitutionally protected free press. It was a real head turner hearing Reince Priebus admit that Trump was looking at ways to punish the press; change libel laws so anyone can sue the media out of existence. What's so crazy about that?

4. Rubbing shoulders with brutal dictatorial leaders, many who have killed journalists, Trump is now inviting them to the White House, while criticizing and distancing himself from U.S. allies:

Russia, Iran, Iraq, Venezuela, Egypt, Turkey, the former Ukraine, Georgia, are concrete examples. What do these regimes have in common? They have ‘elected’ leaders. That’s the democratic part. Virtually every other aspect of their governance structure looks a lot like authoritarianism run rampant.


President Donald Trump has invited Philippine president Rodrigo Duterte to the White House "to discuss the importance of the United States-Philippines alliance," according to a White House readout of the leaders' phone call on Saturday.

"It was a very friendly conversation. President Trump enjoyed the conversation and said that he is looking forward to visiting the Philippines in November to participate in the East Asia Summit and the U.S.-ASEAN Summit."

Duterte is a controversial and polarizing leader with a deadly and ruthless reputation. Since taking office last year, he has been outspoken in his support of extrajudicial killings of thousands of citizens accused of dealing or using drugs. His crackdown on suspected drug dealers and users has left nearly 2,800 people dead purportedly in gun battles with police. Another 6,000 deaths are being investigated. 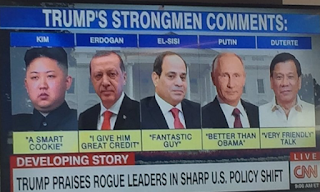 But Trump loves a good dictator/tyrant for their popularity and power...


5. Trump may think North Korea's Kim Jong-Un is dangerous, but that's what makes him what Trump calls a "smart cookie..."


6. Here's Trump on Obama's wire tapping allegations that he's still not willing to prove. This is Trump folding under media pressure, the little baby: