Another Frightened White Nationalist Victim of Liberalism wrongly Whines about "Censorship" at Berkeley.

My conservative friend in Milwaukee continues to avoid responsibility for his Trumpian partys fascist tactics by pointing out examples of liberal censorship on campus. But Berkeley, a state university, did not censor Milo Yiannopoulos, editor for the conservative website Breitbart. Protesters instead scared him off.

Milo Yiannopoulos; Victim and Hero: Frightened conservative zealots use campus protests to build their credentials, by canceling speeches and pretending their life would have been in danger around liberal protesters. That's why some campus' are reluctant to invite some of their more elite speakers; the expensive security they demand is beyond any university budget. ABC News:


A planned appearance Wednesday by controversial internet figure Milo Yiannopoulos, an editor for the conservative website Breitbart was canceled after protests turned violent on the U.C. Berkeley campus. A similar event at UC Davis was also canceled. Protesters took to the streets of Berkeley after police dispersed the crowd at the university.

Of course extreme conservative free speech topics may have something to do with all the resulting blowback. Funny thing, Republicans want all the free speech they can get, but without all the consequences. 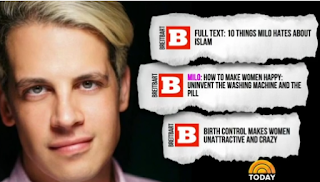 The 32-year-old Greek-born British journalist is a senior editor for the conservative news and opinion website Breitbart ... a spokesperson for the so-called "alt-right" movement for his extreme views on Islam, social justice, and political correctness. He's a self-proclaimed "internet troll" who has been widely criticized for being racist and misogynistic.

Trump Idea or Fox Fake News Networks? Trump has admitted he gets his news from TV and Twitter:

Perhaps the president had started his morning by tuning in to Fox News. Shortly before Trump sent his tweet, commentator Todd Starnes had said that “President Trump should immediately issue an executive order blocking Berkeley students from receiving any federal funding. Same goes for any other public university that wants to silence conservative voices. Free speech for all or no federal money, not a single taxpayer penny, period.”

Berkeley University police weren't convinced student protesters were responsible for the violence. In fact the protests were planned for weeks, giving agitators time to plan out the attacks:

The university's police chief, Margo Bennet, told reporters,“I do not believe our students were involved in the vandalism and the violent behavior that occurred. This was a group of agitators who were masked up, throwing rocks, commercial-grade fireworks and Molotov cocktails at officers. Those were not our students. That's not our students' behavior.”

But what about Trump's threat?

The first thing that occurred to me was how legal was Trump's threat, which still has not been reported in any of my searches:

The Foundation for Individual Rights in Education, a Philadelphia-based group that promotes free speech and due process rights at colleges and universities, stated that there was no evidence that Berkeley as an institution had made any effort to silence Yiannopoulos.

“Those who engage in violent and/or destructive protests are ultimately responsible for their unlawful behavior and may be subject to arrest and prosecution by law enforcement. To punish an educational institution for the criminal behavior of those not under its control and in contravention of its policies, whether through the loss of federal funds or through any other means, would be deeply inappropriate and most likely unlawful.”

More on this as the legal questions get answered.

On the more humorous side, you could "sort of" look at this brewing civil war "sort of" like this:


Berkeley College Republicans Jose Diaz: "We want to bring someone here on campus to help speak on issues that sort of opens the dialogue."