Trump's missteps and lies are unfolding so rapidly that who can keep up. After taking the last 4 days off, it's time to jump in again, even  at the risk of my health.

The breathless devotion Trump voters have in this malignant narcissist is mind boggling. Seriously, telling the truth 4% of the time? 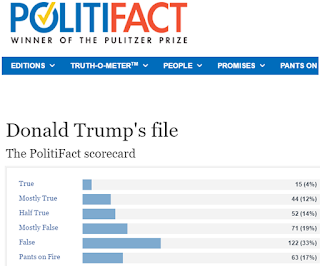 Flynn? What Flynn? After enduring endless investigations over what "appeared" to be conflicts of interest in Hillary Clinton's past, Republican Rep. Jason Chaffetz just can't muster up enough outrage to look into Mike Flynn's traitorous communications with Russia. Just as bad, Trump knew about this and didn't throw Flynn under the bus until the public found out. Real grownup like: 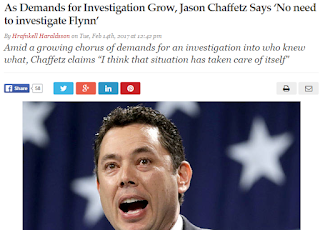 Chaffetz: “I think that situation has taken care of itself. I know that the Intel committee is looking into the hacking issue.”

Fat chance. In fact, Trump wants to know how this leak got out, forget about Flynn:


Certainly, Chaffetz was well aware that House Intelligence Committee Chairman Devin Nunes (R-CA) has no intention of investigating Flynn, because “executive privilege.” Music to Donald Trump’s ears.“I want to hear from the FBI as to how this got out.”

What is Chaffetz really pissed off at? A cartoon character pushing Zika virus awareness on PBS:


Angry Utahans shouted down Rep. Jason Chaffetz, chairman of the House Oversight Committee, at the Republican’s recent town hall meeting. “Do your job!” Scolding him for refusing to investigate the Trump administration.

Chaffetz, without fear or favor, the threat to America posed by Sid the Science Kid. On Jan. 26, the day after TMZ reported that the CDC was planning a Zika-education partnership with Sid, Chaffetz fired off a letter to acting CDC director Anne Schuchat, demanding a “written explanation” and “communications between CDC and the Jim Henson Company and also PBS.

Chaffetz, in closing, reminded the CDC that his committee can investigate “any matter” at “any time.” Yes, it can — which is why it’s so appalling that Chaffetz is focusing on an animated preschooler.

Chaffetz may have picked the wrong president to defend, since Utah voters are not a big fan of Trumps. After townhall protesters demanded Chaffetz hold Trump accountable, he did what any authoritarian would do, trash the First Amendment and accuse protesters of being paid shills. Wow, we're getting rich:


Without any evidence, Rep. Jason Chaffetz has now claimed that he believes those in attendance at the town hall were paid protestors and not actual, concerned constituents. In an interview with Deseret News, he further stated that he believed the crowd's treatment of him was "more of a paid attempt to bully and intimidate" than anything legitimate.

"You could see it online a couple days before, a concerted effort in part to just cause chaos. Democrats are in disbelief that they have nothing but flailing and screaming to deal with this... We’re better than that. That’s not what the average Utahn is like."

When asked by Deseret News if he will hold another town hall again anytime soon, the congressman responded that he hoped to find a way to speak with his constituents without providing a venue "for these radicals to further intimidate."

Scott Walker thought the same thing about the massive public protests in Wisconsin over union busting Act 10, going as far as to title his book, "Unintimidated." Who knew protesting for racial equality and against the Vietnam war was intimidating.

But I digress. Trump's impeccable pick, the really really great Gen. Flynn, still has a whole bunch of questions to answer:

Republicans better than Democrats? Republicans say they hate everything Democrats do and say, but that's a lie too. It's projection. They want to act just like they say Democrats do. Check out this recent tweet from my conservative friend in Milwaukee:

"What difference does it make. Was it an issue when Loretta Lynch met with Bill Clinton...when Lynch pleaded the Fifth Amendment on the money going to Iran, I didn't hear a text from you saying it was wrong...No John it's not an issue."

So says Breitbart fake News. See, they're not really responsible for their actions...ever:

And if Republicans supposedly violated the Logan Act, so did these Democrats... 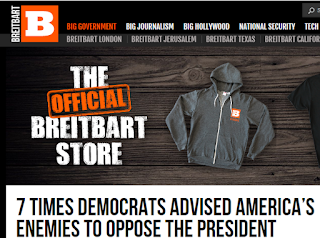