No big surprise, but when Scott Walker offers up a statewide single payer system and the Democratic Party doesn't stand up and point that out...well, what are we waiting for?

Think about it, this could make universal health care an acceptable idea to Republican voters. We'll just have to highlight what the Walker Authority is saying. The article below about Walker's statewide self-insurance budget proposal, offered up ready made talking points:


1. “What the board is doing is controlling more of what it can control, rather than ceding that authority to folks with whom we contract.”

2. The move should save $60 million over the next two years and retain access to 98 percent of medical providers,

There are those who say it might cost $100 million more, instead of saving taxpayer money. Just more of that doom and gloom GOP rhetoric? Bottom line, this would be a government run system, regardless of how mismanaged or poorly constructed Walker's proposal might be. And private insurers will still be managing the policy for the state.

And it doesn't matter how reckless Walker's proposal is right now knowing health care in this country is about to get shredded nationally by Trump and Paul Ryan.

It's time to take advantage of the estimated savings Walker is touting with government run health care. 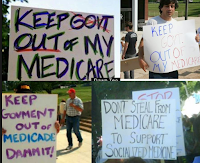 Which brings me to one final point; health care doesn't have to be this convoluted and difficult to understand. It should tell you something when people carry signs that read "keep government out of my Medicare." As simple as Medicare is, people still don't get it.

I still haven't been able to find the exact number of self-insured states claimed by Walker, according to this tweet: