Most Americans were shocked to hear about the Bowling Green massacre. I know I was. True, it never happened, and by default, never got the press coverage it should have.

Kellyanne Conway later said she meant to say "terrorists," which doesn't quite sound right in context either:


Conway: "President Obama had a six month (not true) ban on the Iraqi refugee program after two Iraqis came here to this country, they were radicalized, and they were the masterminds behind the Bowling Green massacre. Most people don’t know that because it didn’t get covered."

Replace "massacre" with terrorists..."they were the masterminds behind the Bowling Green terrorists?" Nope. 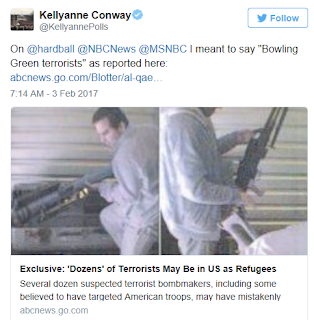 As pointed out by the NY Times: "Yet, by pointing to an ABC News article from November 2013, she undermined her claim that the story 'didn’t get covered.' It did."

It's a common GOP tactic to claim a story didn't get coverage, just to make it seem like they're the victims of a media double standard. It's almost always not true.

But at least some good has come out of all of this "gotcha" politics; the Bowling Green Massacre Fund. Click the "make a donation" link and you're taken to the ACLU donation page: 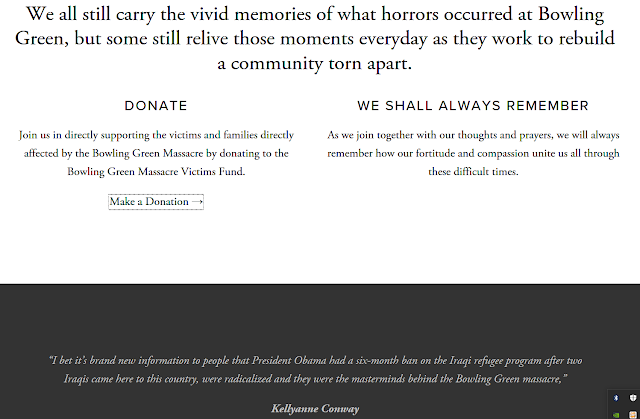