Tea Party Protesters Paid for by Americans for Prosperity...Projection? 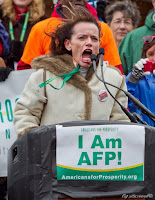 How ridiculous can desperate Trumpian Republican be, claiming the massive nationwide demonstrations are the result of paid protesters. That's one hefty expense for George Soros, who said has not directly funded any of them.

Projection: Projection is the one major theme that runs through my blog. They've got it bad. Take their latest projection; the women's protest and town halls are filled with paid Trump protesters! Funny, they might be thinking back to when they collected a paycheck or got special interest funding for material and bus rides. Here a picture of conservative radio host Vicki McKenna at a protest paid for by Americans for Prosperity back in 2011 in Madison defending Scott Walker's union busting Act 10. You can't help but notice the sign on the podium?

Could it be any clearer? Yes, the Koch Brother's Americans for Prosperity funded the tea party. Any questions?

There were statewide bus tours of protesters funded by AFP as well, like the two shown here, to jazz up the sparse crowds. 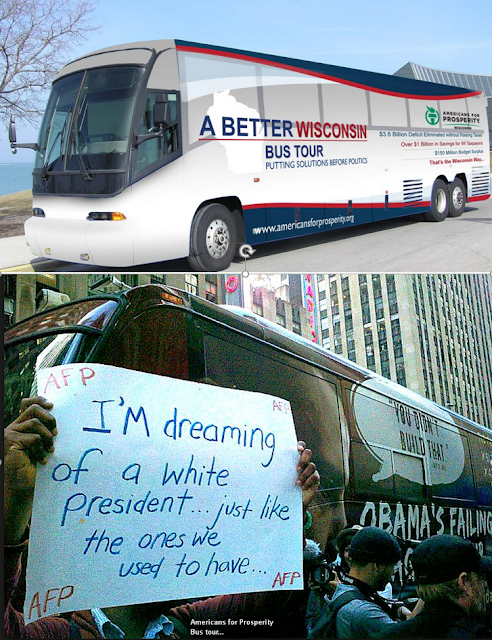 From Raw Story, this confirmation from reporter Jane Mayer:


Perhaps the greatest irony about the “paid protester” line echoed by many in the GOP is that the Tea Party itself benefited from big-money backers, despite its self-styled image as a popular uprising against government overreach. As the New Yorker’s Jane Mayer reported in 2010, Americans for Prosperity, the Koch brothers’ political advocacy group, coordinated with the Tea Party in 2009, disseminating talking points, funding protests, and cultivating candidates. Meaning the people who participated in Tea Party protests were, knowingly or not, furthering the Kochs’ political agenda.


The advocacy wing of the Americans for Prosperity Foundation—an organization that David Koch started, in 2004—held a different kind of gathering. Over the July 4th weekend, a summit called Texas Defending the American Dream ... 500 people attended the summit, which served, in part, as a training session for Tea Party activists in Texas.

An advertisement cast the event as a populist uprising against vested corporate power. Peggy Venable—a longtime political operative who draws a salary from Americans for Prosperity, explained that the role of Americans for Prosperity was to help “educate” Tea Party activists on policy details, and to give them “next-step training” after their rallies, so that their political energy could be channeled “more effectively.”

And she noted that Americans for Prosperity had provided Tea Party activists with lists of elected officials to target. She said of the Kochs, “They’re certainly our people. David’s the chairman of our board. I’ve certainly met with them, and I’m very appreciative of what they do.”

In the weeks before the first Tax Day protests, in April, 2009, Americans for Prosperity hosted a Web site offering supporters “Tea Party Talking Points.” The Arizona branch urged people to send tea bags to Obama; the Missouri branch urged members to sign up for “Taxpayer Tea Party Registration” and provided directions to nine protests. Bruce Bartlett, a conservative economist and a historian, said the Kochs are “trying to shape and control and channel the populist uprising into their own policies.”

A Republican campaign consultant who has done research on behalf of Charles and David Koch said of the Tea Party, “The Koch brothers gave the money that founded it. It’s like they put the seeds in the ground. Then the rainstorm comes, and the frogs come out of the mud—and they’re our candidates!”